I've spoken before about one of my golden rules: Never get out the small brush until you're done with the big one!

Knowing when to whip out the #0000 brush and concentrate on details is an all important lesson we can learn by studying the Masters. Caravaggio knew as well as anyone that he could leave large areas of his canvas almost completely devoid of detail as long as he threw in a painterly flourish here and there. Even a small area of fine detail is enough for our brains to read the entire painting as a fully finished and convincing representation of space.

Consider the striking Amor Vincit Omnia, noted for it's realistic representation of Cupid and for it's "photographic clarity". It's worth concentrating for a moment on what that means in terms of the construction of the painting. 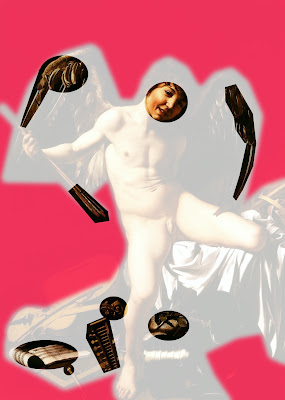 The areas in red (above) have almost no detail at all, let alone fine detail. You could even include large areas of the rendered flesh in there too. Even a quick glance shows us that Caravaggio painted over 50% of the canvas with a big fat brush. Only the dark areas (highlighted above) were painted with his tiny brushes.

Cupid's charmingly crooked teeth and the huge wings lent by the painter Orazio Gentileschi as props are among the very few areas that receive Caravaggio's closest attention. Less than 10% of the canvas, in fact. Yet the painting as a whole invoked huge acclaim for it's realism. That's good news! Think of how much time can be saved by learning this lesson.


I had an opportunity to apply some of these techniques while working on a painting that was an homage to Caravaggio's theme of 'Love conquers All'. I know first hand just how long it takes to really focus on creating detail on such a precise level. I painted sheets of music that had been torn up and taped back together. The notes painted on these scraps took forever. I posted some details from the painting below.

Besides the compositional merit of leaving plenty of breathing room in a painting, of not overwhelming it with tons of distracting detail, it's also a simple and practical matter for the professional painter whereby it's commercially unrealistic to spend massive amounts of hours on any one painting.

It's not about cutting corners necessarily, but I do love finding ways of spending less time working. Thanks, Caravaggio! 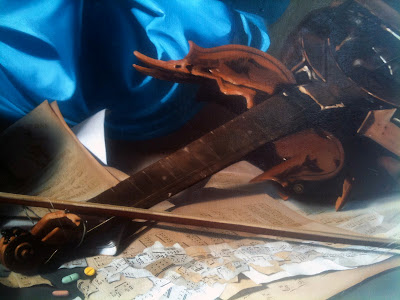 Let's examine that even further: I know from experience that it would take me at least one day to complete each of those areas of detail in the Caravaggio's painting (if I was bold enough to attempt a copy). There are roughly 10 areas of detail, and you value your time at $300 per day. Congratulations! By painting all that detail you've just added $3,000 worth of value to your new painting. What was that? The buyer isn't prepared to pay an extra $3,000 for your effort?

Make no mistake: Somebody pays for all that effort. And if it's not the buyer, then it's you.

I know I cannot paint faster than I already do, because I've tried it. I'm not fast by any means, but I know my limits. I realize that if I'm about to paint a small still life of some fruit, then I had better finish that painting in one day and no longer because the most I can get away with charging for a small painting like that is roughly the same as my day-rate.

Duane Keiser does exactly that. Besides the marketing caché of 'a painting a day', it's also sound financially. If the most you can charge for a small painting is $300-$400, then you had better fine tune your technique so that you spend no more than a day painting it.

It sounds harsh to break it down in terms of money, but if we want to make a living (and maybe even retire one day) then I believe that we have to be a little businesslike about Art production. 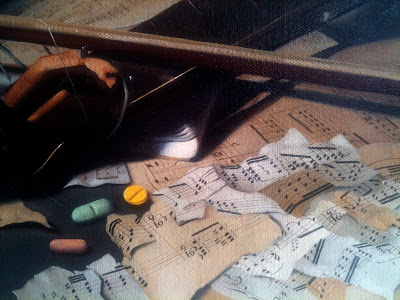