A New Perspective on Velazquez


Velazquez has us standing high above the action in Old Woman Cooking Eggs, but I’ve never fully understood why, though we are clearly staring down on every object in the room, the old woman’s head is out of whack in terms of linear perspective.

The boy is in correct perspective, so that we can see the top of his head (and imagine an ellipse around his hairline) in keeping with all the other objects in the room, and yet she is perfectly in profile. Why is that? The only conclusion I have is that it deliberately creates a disjointed reality. Here is this old woman cooking a meal she’s done a million times before, absent-mindedly staring away into space. The distorted perspective physically reinforces the effect that she’s psychologically not present.


Her detached gaze has often been interpreted as blindness, but I don't think that she's blind. I think it's that she seems detached due to the off-kilter angle of her head. Maybe it's down to his being barely 19 years old when he painted it and it was simply a 'happy accident', but I like to think that this is his genius on display and that it just 'felt' right. Or perhaps it was a deliberate calculation: perhaps Velazquez manipulated perspective in the same way that we might deliberately manipulate value in a painting to establish a focal point. 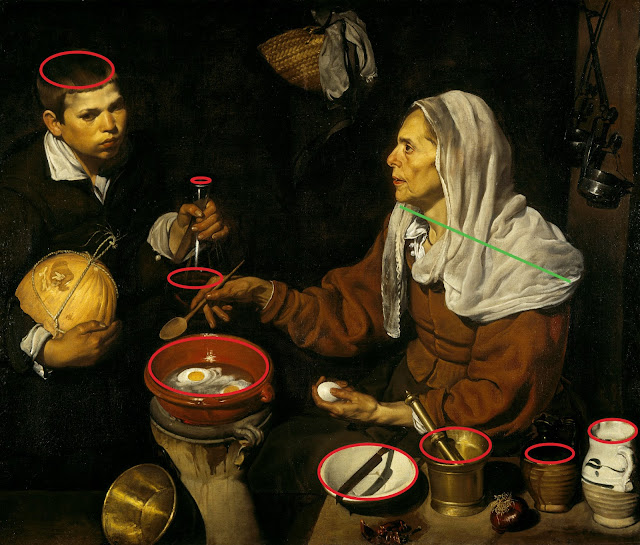 Drawing ellipses on some of the major shapes in the painting, and a green line across her shoulders, clearly demonstrates a horizon line that's at least at the top edge of the canvas, if not above it.

This 14th Century illumination shows the personification of Geometry. I'm glad she's not teaching me about geometrical perspective, as all the objects appear to be sliding onto the ground.


It wasn't that unusual to play around with multiple perspectives in a single painting when trying to create a point of attention. Vicenzo Campi unnaturally tips the bowls of fruit towards us for pictorial effect, despite the fact that they are clearly on a different plane than the woman and the landscape. 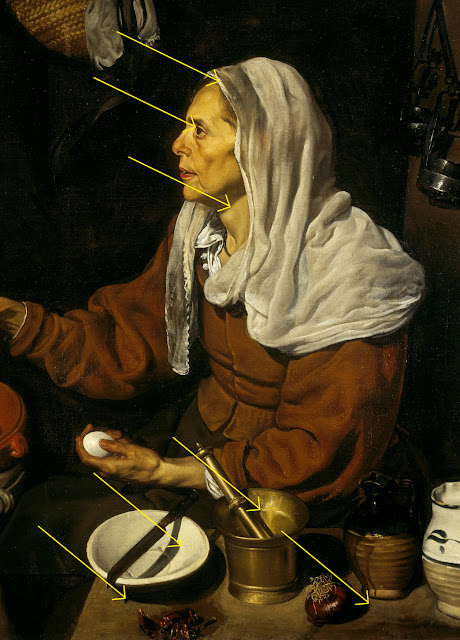 Since we're ripping apart masterpieces, why does is seem as though are there two separate light sources? Maybe I'm wrong, but is her face is lit from lower down than everything else? The shadows on her headscarf seem almost horizontal, and her eye is fully lit.

Linear perspective is like any other tool in painting. You can use little bits of it, or ignore it completely. It's up to you. It's a topic that a lot of painters avoid as being overly mathematical, but as Velazquez shows us with his early masterpiece, even in a rigidly constructed pictorial space there's room to be intuitive.
7 comments
Newer Posts Older Posts Home
Subscribe to: Posts (Atom)