Fractal Geometry in African Villages: Lessons from an Outsider


"The exception proves the rule." How many times have we heard that without really understanding it? It was Cicero in ancient Rome who first said it, and what he implied was that exceptions presuppose the existence of a norm (to which they are the exception). We always look to outsiders, the exceptions to the rule, to help define ourselves as normal. Outsiders have always defined insiders. An old military adage says that you need a great enemy to create a great army. For ancient Greece, it was the Spartans and Macedonians who provided the "savage" exception that proved the superiority of the civilized Athenian polis, or city-state. For the West, a monstrous "other" occupying the rest of the world provided evidence of the dubious superiority of its own worldview.


In popular imagination, the exceptions to Western civilization still represent everything uncivilized, chaotic and savage in the world. When Edward Said and Claude Levi-Strauss came along in the '60s and pointed out that, hey, just because other cultures are different doesn't mean that they are devoid of their own internal logic and structure, we began to open our eyes to the fact that maybe, in the end, we had something to learn from "them." We'd gotten so blind to the veil we've fabricated as a frontier between city/country, order/chaos, insider/outsider, West/Rest, that we'd lost sight of the fact that ours is just one of many ways of being in the world, and that the veil is an illusion.


Case in point: the gridded and bordered modern city that sprang up in Europe towards the end of the Roman Empire - with its straight lines and corners retained by a circumscribing wall - quickly became the template for Western life. They were initially walled defensive positions (called Oppida), but the Romans soon became aware of their greater (in the long run) symbolic significance: The walled city is a locus of power. Those outside the walls were the medieval "wildmen," or savages beneath consideration. It established a clear - if fictional - boundary between the order of Man and the chaos of Nature. 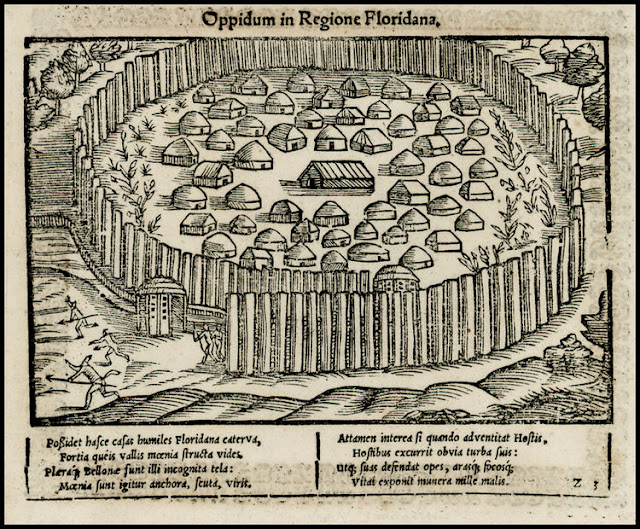 The Universe is Euclidean, its rigid geometry tells us. The very linearity of modern cities came to represent the mythic Western advancement from barbarian to citizen, from chaos to order. The more squared-off the space, the more civilized its occupant. The barbarians lived outside the polis amid the chaos of nature, and "Nature," as Katherine Hepburn reminded Bogart in African Queen, "is what we are put in this world to rise above." Consequently, linear gridded space became the Western standard.


By the 15th Century, Linear Perspective gained favor as a way of reifying what had already become a pervasively geometric worldview, literally set in stone by the Romans.  Perspective appealed to rich patrons because it backed up their notions of the hierarchy of social power (think majestic cathedrals with impossibly soaring trompe l'oeil ceilings inspiring awe among the plebs). Artists of Europe clamored to learn the rules of Linear Perspective as a way of codifying a "civilized" worldview, which flattered their clients by portraying them as higher-order citizens. Even if anyone had been aware of another way of seeing the world, they wouldn't have cared for it. West is best, and all that.

Every day I walk the streets of New York City, I'm aware that to get across town means zig-zagging at right angles across an artificially imposed grid that by its very inorganicness was designed to position the works of man as superior to those of nature.

What would an alternative even look like? We're so used to what we've got that it's hard to picture it, but we don't have to: When the fractal geometry of African villages was "discovered" by the West, it provided the exception that exposed the tenuousness of the norm we've come to accept. Certain villages in Africa (such as Tiébelé on the Ghanian border) have been organizing themselves for centuries according to mathematical principles that were only discovered in the West in the 1900s.


Whereas the Western gridded polis denies Nature by proposing space as a system of stackable finite blocks, fractal architecture suggests an unfolding of space according to principles of organic growth. Each unit of fractal geometry relates intrinsically to its neighbor, regardless of scale. There is no frontier, no hierarchy of space as in the West.


Fractal architecture could never produce a Versailles, for example, that so self-consciously set itself apart from the populace that surrounded it. The "self-similarity" of fractal geometric modules would preclude it. Western architecture relies on the grid as an exclusionary device - you are either inside or outside the square - but fractal architecture seems to suggest that we all have the same potentiality.

I always worry that I'm writing too much in blog posts, that they're too long (because who the hell reads blog posts?), so I won't be getting into the weeds about what fractals are, except to say that they began as an outlier set of mathematical rules once considered to be useless oddities - Euclid's outsiders.


The realization that whole communities live according to a spatial map that is entirely different to ours was an eye-opener. Watch this TED talk (and buy the book) by this fascinating mathematician who traveled Africa on a Fulbright scholarship, standing on rooftops and recording the fractal geometry he saw all around him. And next time you're sitting at a traffic light, imagine a world that has no right angles.