I bet you a million dollars you fail this color test 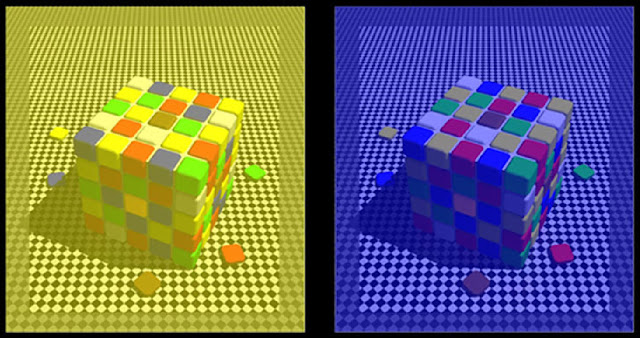 The human eye is as good a camera as can be made from a scrap of meat and a dash of jelly, but our ever-distrustful brain works hard to overrule our eyes at every turn. "Grass is green," our brain tells us. Our eyes see something else, myriad shades across a spectrum, but they are mute. It's our brains that do all the talking.

See the blue tiles on the top side of the big Rubik's cube on the left, above? Ok; how about the yellow tiles on top of the right Rubik's cube above? They are the same color. You're not seeing blue on the left, nor are you seeing yellow on the right. What your eyes are actually seeing is the same color. It's your brain that has created a difference. If there was ever proof that seeing happens in your brain and not in your eyes, this is it.

The test was to see them both as the same, and you failed. So I'll be spending my million dollars on cocaine and nose jobs, in that order.

Harry Chapin ruined family car-trips across the world with "Flowers are Red..."
but he certainly made an impact. I still remember all the damn words. [video link]

What on earth is going on in our brains? Diane Ackerman explains in A Natural History of the Senses. "We are not really cameras. Our eyes do not just measure wavelengths of light. As Edwin Land, inventor of the Polaroid Land Camera and instant photography, deduced, we judge colors by the company they keep. We compare them to one another, and revise according to the time of day, light source, memory."

Beau Lotto, founder of Lottolab, a hybrid art space and scientific laboratory, investigates the crossover between what our eyes apprehend and what our brain perceives when it comes to color. Watch his fascinating TED talk here, if you haven't already seen it. He's produced some incredible graphics that fool the eye so completely that I had to check in Photoshop using the eye-dropper tool to make sure I wasn't losing my mind (including the three color tests reproduced here). 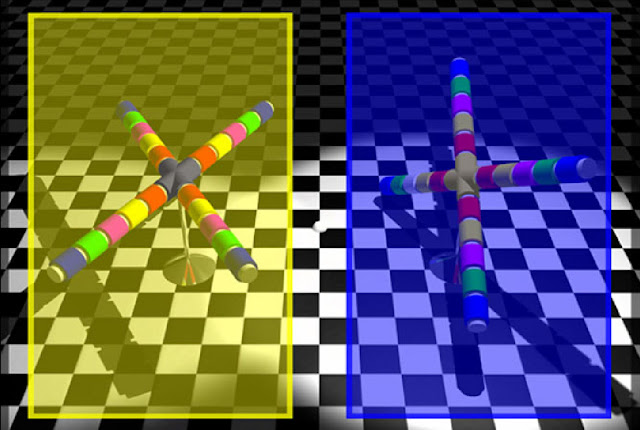 In the Image above for example, how would you feel if I told you that the x-shaped piece at the center of both of these building block contraptions is the same color? On the left it looks blue, and on the right it looks yellow, but all of that is happening in your head based on assumptions your brain is making about the environment surrounding each x-shaped piece. In fact, they are both standard 50% grey, and not a "color" at all. Bring that image into Photoshop and check if you don't believe me.

Lotto explains in his TED talk that the perceptual function of color, not surprisingly, has a basis in evolution. It's a point with which Ackerman agrees in her book. "Every college student at one time or another has asked what it means to know something," she says, "and whether there are simple perceptual truths that people share. We watch color television because our ancestors had eyes cued to the ripening of fruit; and they also had to be wary of poisonous plants and animals (which tend to be brightly colored)."


At dusk, we still see a blue mailbox or a red car, but they are everything but. "Even though it's sunset and the quantity, quality, and brightness of light have all diminished, we still perceive the blue mailbox as blue, the red car as red." Conceptual categories like Red and Blue lump disparate phenomena together, such as a flower "hit by glare, rinsed with artificial light, saturated with pigment, or gently bathed in moonlight."

"Otherwise, our ancestors wouldn't have been able to find food at sunset or on overcast days. The eye works with ratios of color, not with absolutes. Land was not a biologist, but a keen observer of how we observe, and his theory of color constancy, proposed in 1963, continues to make sense.

In the end, perhaps the words we use to describe colors have more to do with the idiosyncrasies of the particular culture in which we are raised than a relationship to what's actually out there. "Not all languages name all colors. Japanese only recently included a word for blue," continues Ackerman. "In past ages, aoi was an umbrella word that stood for the range of colors from green and blue to violet. Primitive languages first develop words for black and white, then add red, then yellow and green; many lump blue and green together, and some don't bother distinguishing between other colors of the spectrum.

"Because ancient Greek had very few color words, a lot of brisk scholarly debate has centered around what Homer meant by such metaphors as the "wine-dark sea" Welsh uses the word glas to describe the color of a mountain lake, which might in fact be blue, gray, or green. In Swahili, nyakundu could mean brown, yellow, or red. The Jalé tribespeople of New Guinea, having no word for green, are content to refer to a leaf as dark or light.

"Though English sports a fair range of words to distinguish blue from green (including azure, aqua, teal, navy, emerald, indigo, olive), we frequently argue about whether a color really should be considered blue or green, and mainly resort to similes such as grass green, or pea green. The color language of English truly stumbles when it comes to life's processes."
3 comments
Newer Posts Older Posts Home
Subscribe to: Posts (Atom)