How to Draw a Volute, or Acanthus Scroll 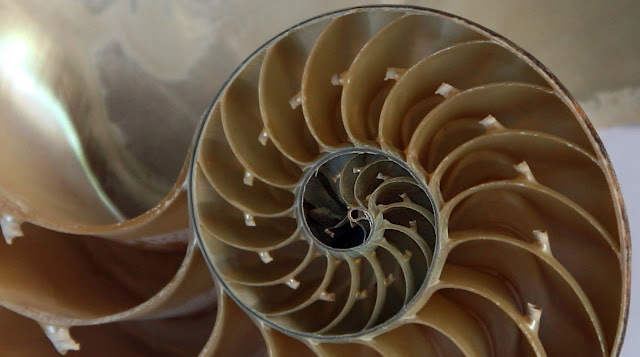 I don't think there is a more beautiful line in the world than the curve described above. Zeising went so far as to claim for the Golden ratio that;


"... [It is] the universal law in which is contained the ground-principle of all formative striving for beauty and completeness in the realms of both nature and art, and which permeates, as a paramount spiritual ideal, all structures, forms and proportions, whether cosmic or individual, organic or inorganic, acoustic or optical; which finds its fullest realization, however, in the human form."

Well actually the nautilus shell is not a true Phi-spiral, but it's pretty close so we'll go with Zeising's effusiveness for now. This is Part IV in the series How to Draw the Acanthus, and deals with the topic of how to draw a volute, or acanthus scroll.

I don't mean to mislead with the opening image, but in this instance we are going to look specifically at the Ionic volute (not the curve described by the logarithmic spiral above). I have linked out in this article to other mathematical scrolls if you're interested in further reading regarding Fibonacci numbers, Golden Spiral, or logarithmic spirals.

But first, a little background. The following quote is from Elements of Geometrical Drawing, by John Henry Spooner (1901), describing the Ionic volute.

James Stuart and Nicholas Revett’s The Antiquities of Athens (1790) was the book that popularized the Ionic order of the Erechtheum through it's beautiful illustrations. Historian Calder Loth points out that "The Erechtheum’s volutes are the most complex of all Greek Ionic capitals, having a series of tightly spaced creases or canals resembling fine drapery. The central swag in the canals, a characteristic feature of Greek Ionic capitals, emphasizes the drapery-like character."
The volute made it's way into the Corinthian order too. A Textbook on Ornamental Design (1901) introduces the Choragic monument of Lysicrates in Athens as "the principal structure of Greek origin designed in the Corinthian order", and describes the section of Acanthus scroll pictured above as showing...


"... not only the elaboration of ornament characteristic of this order, but also a principle of ornamental design that is of the utmost importance in its relation to the lack of invention of new forms and the restraining influences of certain art periods. It will be observed here that the various parts of the acanthus scroll grow out of one another in a continuous line. This is a principle of design that originated with the Greeks, and was continued by the Romans."

So we're beginning to see the importance of the scroll design, whether as described by the natural roll of a fern or shell, as evidenced in Greek, Roman or Islamic architecture, or as a mathematical design principle adopted by the likes of Le Corbusier. It seems we should probably learn how to draw one of these things then, right? 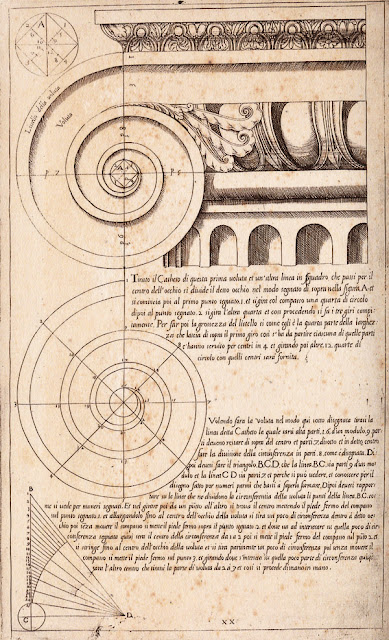 The point is that although the ratios may change, our method for constructing the volute remains the same. We could substitute 7 : 5.5 : 4.321 (which would describe a different curve) just as easily, but for now we will concentrate on drawing the distinctive ram's horn shape of the scrolls of an Ionic capital as described by Spooner's ratio.
Here are the steps you need to follow:
Step 1: I decided arbitrarily to start with a rectangle 3.5cm wide and 6cm tall [Fig. 1], and to start the convolutions of the curve at A, 3.5cm from the base of the volute. 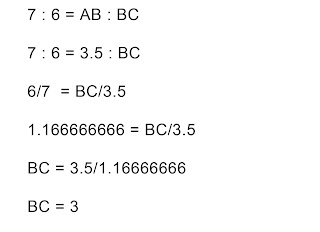 
Step 3: Next, draw lines through the points ABCD at 45º [Fig. 3] to where they intersect to form a rectangle in the middle.


Step 4: See that little rectangle that you just made? You'll have to find the midpoints of each of those sides. Let's call them 1,2,3, and 4. Now draw lines perpendicularly from those midpoints to intersect AB, BC, and CD [Fig.4].

Step 10: If you wished, you could repeat Step 6 through 9, to give you a third inner curve to the spiral, but I'm going to stop here. From the last point (8), instead of describing a short arc, we continue around and draw a full circle [Fig. 10], which is the central circle of our newly completed volute. So there you have it.


Step 11: I could have just stopped at Step 10, but I'm going to add two more steps. I want to extend and soften the curve at the top (or the "thread", to borrow a term from a stair-makers lexicon). This will make it look more like the acanthus scroll. In order to do that, take the line that passed through Point 6 and Point 1 [Fig. 11] and extend it out to the left. Here's where a little creativity comes in. Draw a line at 45º that intersects with your horizontal line at point a'. You can position that line wherever you want.

Now draw an arc centered on Point a', that goes from Point 1 and stops where it intersects the 45º line.

Here is the completed scroll without all the construction lines, and with one of the beautiful ornament drawings of the acanthus scroll from a previous blog post superimposed for comparison: 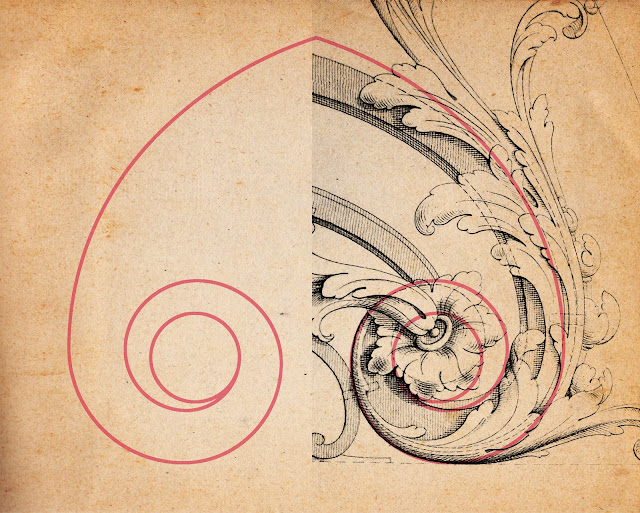