How to Paint Trompe l'Oeil 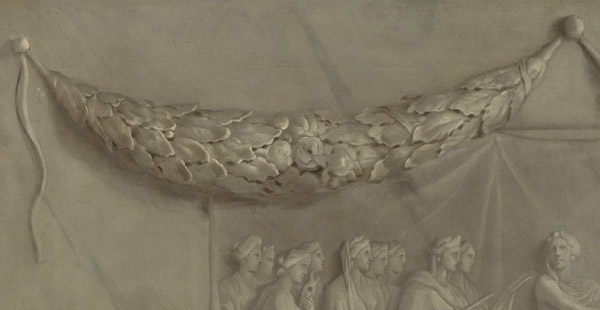 Gerard De Lairesse's trompe l'oeil grisaille masterpiece is an excellent lesson in how to paint trompe l'oeil. Taking a closer look at Allegory of the Sciences, we can discern his technique for creating a successful illusion of depth - particularly with reference to the value range he employed.

When I speak of 'value' here, I'm referring to the Munsell color system. I personally use the term interchangeably with 'tone' or 'tonal value', although that's probably not correct.

I will never forget speaking with my friend Dermot Power (concept artist for films such as Star Wars, Harry Potter, Batman Begins, Charlie and the Chocolate Factory and Alice In Wonderland), who told me that you have to be really careful with highlights: The sign of a novice is the tendency to touch everything with a dot of white on the highest point. "It looks like it's snowing" he would say. That really stuck with me. 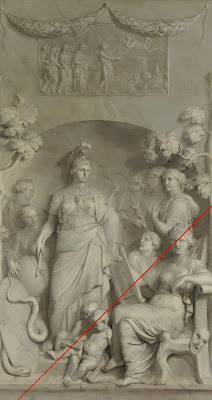 Examining De Lairesse's painting, we can see that he reserved his brightest highlights and darkest lowlights for a section of the painting occupying no more than 30% of the overall composition, inside the lower right section above. I'm calling this his 'High Contrast' section. 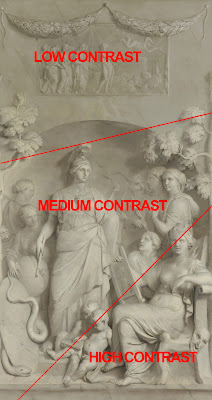 The rest of the canvas is roughly broken in half by two areas of 'Medium Contrast' and Low Contrast'. It is important to recognize the sense of balance achieved by this: the painting neither jumps out at us, nor recedes too much. In my opinion, a general rule of thumb would be to divide the 'value sections' of your canvas into percentage divisions of 30/40/40, as above. If every area within the painting was given the same value range the trompe l'oeil effect would be flattened and unconvincing.


Let's examine this further: Sampling from the High, Medium and Low Contrast areas above and isolating the value of the tonal ranges, we see that the ranges are represented within the graph below. 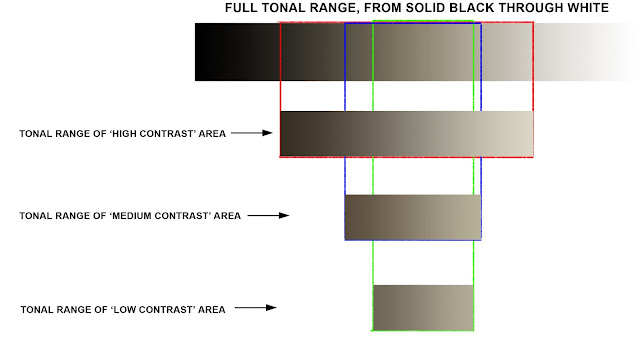 When plotted against the fullest possible value range (solid black through white), we notice some interesting things. To begin with; even the area that contains the darkest lowlights and lightest highlights (lower right section of the painting with the seated figure), doesn't come close to representing the full range of tones available. In other words, the outside boundaries of the value range De Lairesse employs represents no more than 75% grey at its darkest, and 25% grey at its lightest.

Of course, this is borne out through our own observations of nature: Shadows are never 100% black, nor are highlights 100% white. That last point is worth restating, because I have seen it done incorrectly many times: Highlights in trompe l'oeil painting are never 100% white. What? Oh alright, not "never", but let's just say they should be used extremely sparingly. Unless you're rendering a high gloss sheen on a white marble statue, pure white highlights should be a last resort.

The following illustration of spheres receding in space uses the same value range De Lairesse employs to differentiate between foreground and background objects. You can plainly see that the optical laws of chiaroscuro apply: If you want an object to appear to recede in space, limit the values to the middle of the spectrum.

The point gets a little confused here due to the fact that we are dealing with a grisaille representation of carved statuary, not simply a painting of objects in space, as say, a trompe l'oeil landscape. Our objective is to convey a sense of how an object is carved in stone. So not only do we flatten the value range to represent how an object recedes from us, we also flatten the it when representing objects in low relief, as in the detail of the frieze, below. 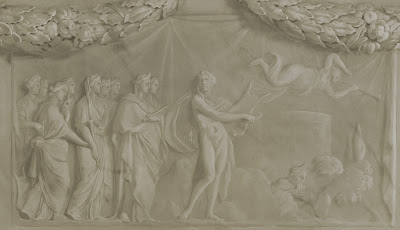 
Generally speaking though (when painting trompe l'oeil molding for example), there is a simple rule of thumb that we should adhere to when dealing with middle distance objects, of medium relief: That is the rule of thirds. Roughly speaking, a sphere should be divided into thirds between highlight, mid-tone and shadow, as below. 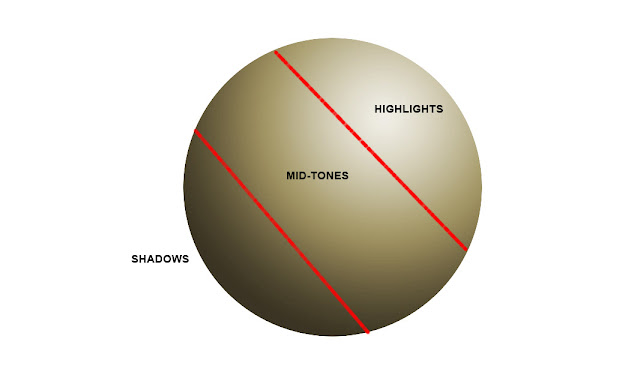 Not only that, but an accent tone, light or dark, should be one third the width of the half-tone, as below: 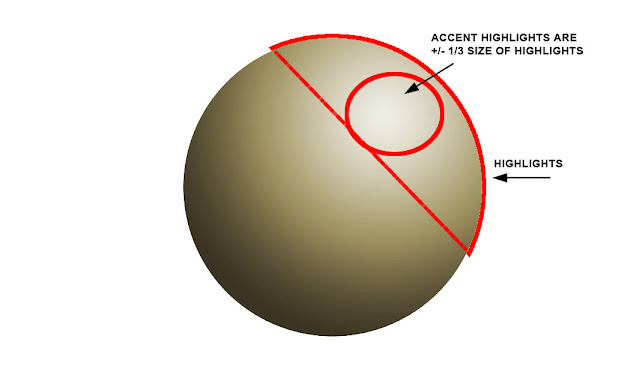 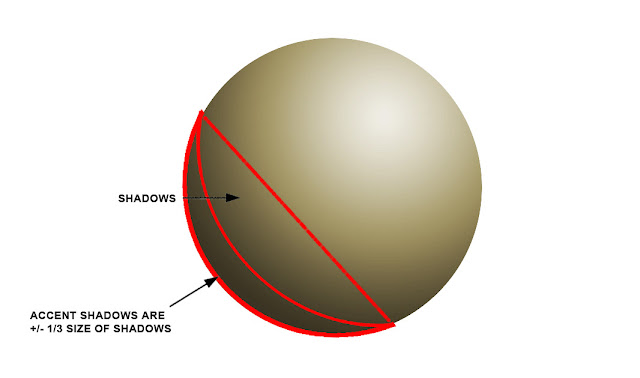