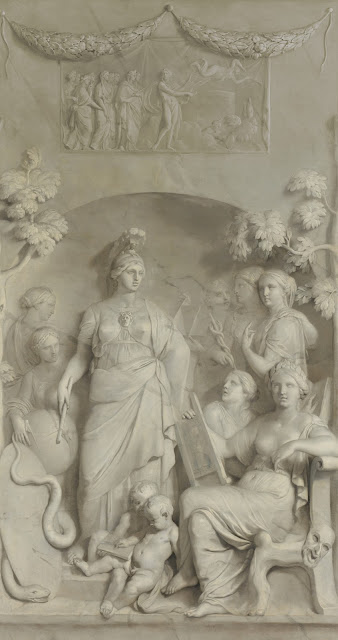 Cesare Ripa is a fascinating figure: Beyond the fact that he worked as a cook and butler little else is known of his life, and yet he somehow managed to publish a book in the early 17th C. that was a smash hit with writers, poets and artists for two hundred years.

It was called Iconologia, and was "based on Egyptian, Greek and Roman emblematical representations. The book was used by orators, artists and poets to give substance to qualities such as virtues, vices, passions, arts and sciences."

Dutch painter Gerard de Lairesse, like so many of his contemporaries, relied heavily upon Iconologia to develop the visual language for his paintings. Here is a huge file of his splendid trompe l'oeil work titled Allegory of the Sciences.