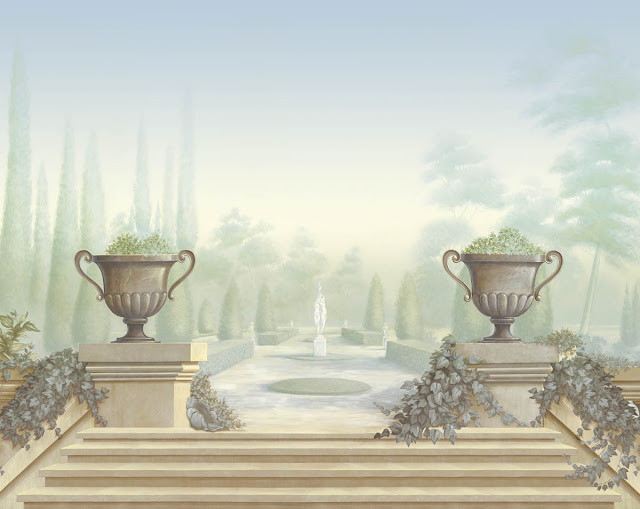 Panoramic murals are about as Romantic an idealized vision of nature as you can get. The section above is from a huge room wrap that I painted on canvas for a client in Europe. Except for the glaring errors in perspective (two horizon lines? seriously?), I was really happy with the result, and jumped at the opportunity to produce a new mural based on the classic woodblock printed 'papier peint' Les Monuments De Paris, by Dufour et Cie (1814).

The goal of these wonderful panels was "to stir emotions through the amazement and bewilderment at the "magical" effect of the spectacle of nature, experienced as a maze in which one gets delightfully lost" [Odile Nouvel-Kammerer].

Les Monuments was a perfect example of an idealized vision of bucolic nature and artificiality. The buildings of Paris are unrealistically aligned beside each other, next to a perfectly horizontal river (the Seine, without a single bridge?!). You can easily picture the encircling effect created by the installed panels. You the viewer are sitting on an island refuge peopled by relaxing images of a Romanticized rural life, separated from the city in the background by a calmly flowing river.

It's no wonder works like these from the manufactories of Dufour, Zuber and Desfossé were instantly popular. That's to say nothing of the extraordinary workmanship that went into their making.

The process of production is fascinating, each panel employing hundreds of individually carved wooden blocks that were inked and printed with separate colors. It's hard to conceive of the amount of time it must have taken to produce a full set of these intricately carved blocks for all the panels. Historian Kathryn Kane tells us that


"In many cases, the same wood blocks which had been carved at the beginning of the century were still used for the papers produced at mid-century. In light of the huge investment in carving all those blocks, this made much economic sense. However, the French paper-stainers were aware of changing fashions and reflected those changes in their scenic papers. For example, The Monuments of Paris set was re-issued several times, and each time any significant new buildings in Paris were added and any which had been demolished were removed. "

The catalog raisonné in French Scenic Wallpaper 1795-1865 shows one set of panels for Les Monuments, but the set I have included here has marked differences, and not just in the architecture. Figures on horseback, ladies strolling by the riverbank; a lot has changed. It was apparently common to make such detailed adjustments. "The small figures of the people strolling about the city were given new costumes in keeping with current fashions."

They were masterfully colored, but interestingly for the artist, employed very few pigments. A spectroscopic analysis of the pigments used in the production determined that; 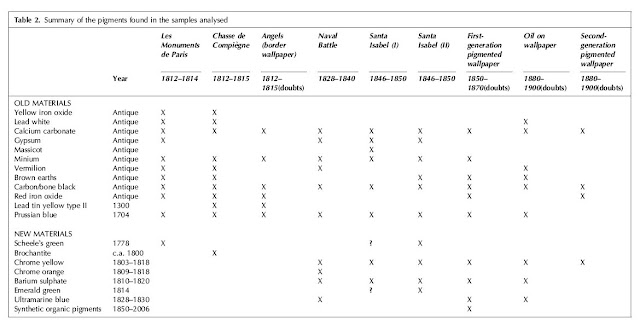 Once completed, the panels had to be shipped. There was no Fedex in 1814. "Each set of papers intended for shipment abroad was very meticulously packaged. Once each roll was completed, it was carefully wrapped, first in paper and then in tin foil. All the rolls of the set were then placed in a water-tight container, usually a barrel, ready to be loaded aboard the ship which would carry them to the United States."

Or wherever they were to be hung. I can imagine the horse-drawn carriage full of barrels of wallpaper crossing the Pyrenees and pulling up at some castle in the Basque country.


According to Carolle Thibaut-Pomerantz (a veteran dealer in decorative papier peints), wood-block panels such as these are "an extraordinary feat in printmaking". Well we knew that, but how much do they sell for these days? That's what we really want to know.

Of course, they weren't always so pricey. In fact, they were developed through the first half of the Nineteenth Century as "an affordable alternative to tapestries or to the hand-painted fresco". Indeed, the Victoria and Albert Museum lists an original price of 50 Francs for the paper.

My version is still in the planning and estimation stages, but I really hope this goes through. It's going to be a lot of fun to paint this!

The last word goes to Ms. Kane: "What could be more soothing to the soul than a room in one’s home in which one could contemplate an idealized and perfect landscape?"