Fear: The Enemy of Creativity? 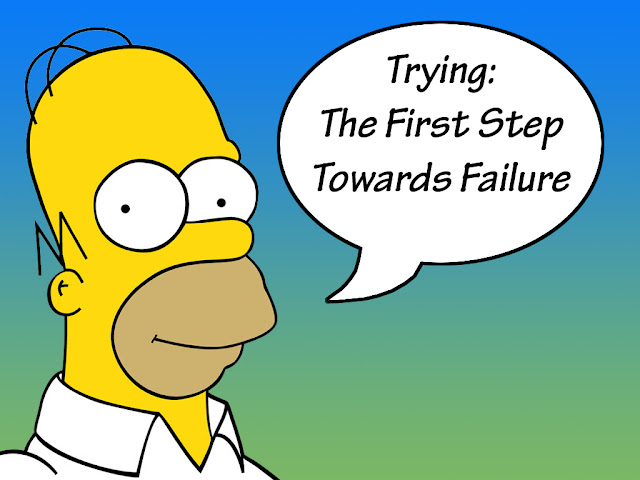 A strange thing happened once during the Roman Empire, writes Kenneth Clark in "Civilization." Rome was in its crazed expansionist phase, with hoards of soldiers pouring across the globe and usurping everything in their path. Nothing could stop them.

But word had gotten out that the Germanic forest-dwelling tribes north of the Danube were fearsome and not to be trifled with. Physically larger and more intimidating than their Southern counterparts, they inspired fear among the Roman troops. So the Romans devised a plan to turn the tables; they brought lions along. Lions? Everyone's scared of lions, right? They'd release the lions at the outset of battle and surely their foe would turn tail and flee.

"Are you gonna release the Hounds? or the Bees?
Or the hounds with bees in their mouths so every time they bark they shoot bees at you?"
- Homer Simpson


The only problem was that the tribes north of the Danube had never seen a lion before so they didn't know that they were supposed to be scared. When the lions came roaring at them they just shrugged their shoulders and killed what they thought were a bunch of huge dogs.

I love this story because it illustrates the extent to which fear inhibits success, or rather; absence of fear can be the key to success. To put it another way:
Ignorance is the Mother of Adventure


Vikings were said to be afraid of only one thing: being burned alive. Life was simpler then. Sometimes I wake up with a horrible dread that seems to bury everything in a grey fog that won't lift, and I'm not even a particularly anxious person. "I'm not  original, I'm a fraud," and all that. Fear of success is just as destructive as fear of failure. Henry Rollins expresses this existential angst better than most:

"How many times have you sat alone in a coffee house and stared into the liquid black abyss of your coffee cup to see the blasted reflection of your own mortal futility staring back at you as you sit still while being jettisoned towards the end of your life?"

I find a strange comfort knowing that even great artists have been subject to the darkness. Monet once wrote to a friend, saying; "I know well enough in advance that you'll find my paintings perfect. I know that if they are exhibited they'll be a great success, but I couldn't be more indifferent to it since I know they are bad, I'm certain of it."


"Sometimes life seems dark and without hope.
At times like these, it's important to remember that it's just a perfectly natural consequence of being realistic."
- The Onion 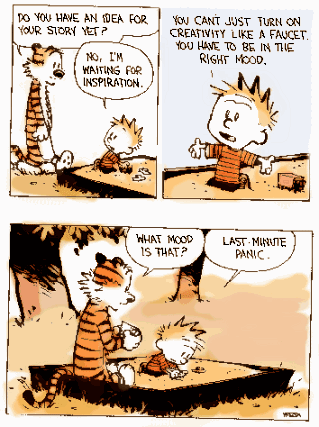 What to do? Authors on the connection between Fear and Creativity:

So, what is Creativity? Amy Tan maintains that Creativity is the inability to repress associations. That feels like a definition to me so I'm going to put it in bold:


Creativity is the inability to repress associations.

I like this because it demystifies the creative process and suggests that it's like cell division; it's just something that goes on out there despite us, and that we simply have to open our eyes and tap into it in order to take advantage.

"Eat, Pray, Love" author Elizabeth Gilbert did a warm and personal TED talk where she spoke about the potentially crippling self-doubt that can arise, and suggested ways of getting around it. For Gilbert, creating distance between the work of her hand and the ego/person that created it is the key to quieting the anxious voices in her head. She cites the Ancient Greeks, who believed that Creativity was a gift from a "divine attendant spirit" - or daemon - "from some distant and unknowable source." It's a psychological construct that protects the artist from the results of their own work. If our work sucks, we can blame the daemons.

"Everything Is a Remix", a (free) great short film about Creativity by Kirby Ferguson, makes the case for the intrinsic association between all good ideas, implying that the act of artistic creation begins when we embrace those pre-existing associations. Creativity is simply a word we use to describe when we transform and combine those connections into a new hybrid. Steve Jobs would probably agree.

The idea that, as artists, we are simply placing a small pebble on top of a mountain created by others may be the first step towards putting our fear in it's place. It takes some of the pressure off.

“I used to make original snowmen, but it was time consuming, hard work. So I said, heck, this is crazy! Now I crank out crude imitations of what's already popular! It takes no time or thought, and most people don't care about the difference, anyway! And what good is originality if you can't crank it out?” says Calvin and Hobbes author Bill Waterson.

He's joking, but he makes a good point. If it's all been done before, then what are we so afraid of?

In "Art and Fear" authors David Bayles and Ted Orland  reassure us that "art is rarely made by Mozart-like people; essentially—statistically speaking—there aren't any people like that. Geniuses get made once-a-century or so, yet good art gets made all the time, so to equate the making of art with the workings of genius removes this intimately human activity to a strangely unreachable and unknowable place."

In "The War of Art", Steven Pressfield takes it a step further and suggests that Fear is actually an essential part of the process of creation, and that it has much to teach us.

"Are you paralyzed with fear? That’s a good sign. Fear is good. Like self-doubt, fear is an indicator. Fear tells us what we have to do. Remember our rule of thumb: The more scared we are of a work or calling, the more sure we can be that we have to do it.

Resistance is experienced as fear; the degree of fear equates the strength of Resistance. Therefore, the more fear we feel about a specific enterprise, the more certain we can be that that enterprise is important to us and to the growth of our soul.”

Twyla Tharp puts it a little more succintly in "The Creative Habit: Learn it and Use It for Life", saying that "there’s nothing wrong with fear; the only mistake is to let it stop you in your tracks.”

We've all got our excuses for not doing stuff...


And no, Ethan never said that. I Just made it it up because I wanted to make a point about insecurity disguised as pretension. In the end it all amounts to the same thing: ego getting in the way again.


McNiff's "Trust The Process: An Artist's Guide to Letting Go"  teaches us how to surrender our egos to the creative process. "There is a magic to this process that cannot be controlled by the ego. Somehow it always finds the way to the place where you need to be, and a destination you never could have known in advance."

"The empty space is the great horror and stimulant of creation. But there is also something predictable in the way the fear and apathy encountered at the beginning are accountable for feelings of elation at the end. These intensities of the creative process can stimulate desires of consistency and control, but history affirms that few transformative experiences are generated by regularity.”

When asked for advice on painting, Claude Monet told people not to fear mistakes. The discipline of art requires constant experimentation, wherein errors are harbingers of original ideas because they introduce new directions for expression. The mistake is outside the intended course of action, and it may present something that we never saw before, something unexpected and contradictory, something that may be put to use.”

Jonah Lehrer's best-selling book, "Imagine: How Creativity Works", also speaks about the conflict between the inhibiting/motivating power of fear.

Some people need a stress-free, relaxing environment in order for insight to arise, and some others need its opposite, plunging themselves into stressful energetic environments. Either way, there's a strange tension between surrendering to an unknowable outcome while at the same time constraining ourselves within an artistic form (a sonnet, haiku, or the four sides of a blank canvas) that gives rise to innovation.

He goes into a fascinating story about Bob Dylan writing "Like a Rolling Stone," and what a pivotal moment it was in Rock and Roll as well as for Dylan's career. In a 1966 interview with Playboy magazine, Dylan reflected on the sudden impact of this breakthrough on his music: "Last Spring, I guess I was going to quit singing," he said. "The way things were going, it was a very draggy situation... But "Like a Rolling Stone" changed it all. I mean, here was something that I myself could dig."

Sometimes I think all we need to do is to throw open the windows and take a deep breath, or just roll down a hill. Anyway, I hope I've given some food for thought, or maybe a book or two for your reading list.