The Etchings of Anders Zorn 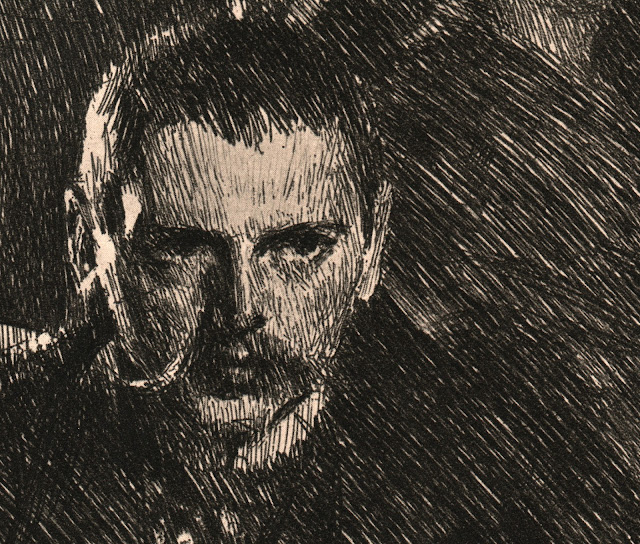 Anders Zorn pursued light as the guiding principle of his art. Whether it was oil paint, watercolor, or etching, the expression of light on the human form and his beloved homeland of Sweden was the foundation of his work, and drove him with an intensity visible in the detail (above) from his self-portrait.


These incredible etchings are from a second-hand book from 1925 that I picked up, and I hope that you will download them at their largest and enjoy his line as much as I do.

"It was in the delightful Zorn and his Wife that he marked the year 1890 with a really important advance in his art as etcher, and here his own linear technique seems to be definitely established with its independence of outline. It is a charmingly homely scene : the happy young artist at work, his eyes intent on the mirror in front of him to catch the reflection of himself, with his wife standing companionably at his elbow, her eyes focussed where his are, his needle in his hand poised for immediate response to the right moment of visual conception.

The light and shade are distributed with happy pictorial balance, and the effect of spontaneity is not in any way overruled by the firmness of the design." [Salaman]

Judging by the expression on his face, the huge glass he's holding was probably full when he started his speech. Fortunately for us though, he rambled on long enough for Zorn to capture this incredible portrait. Okay, maybe it was from a photo but I can almost smell the cigar smoke and booze. The way Zorn establishes planes and form with his line is masterful, the eyes being studies in the perfection of the art.

"Une Premiere was the earliest of his plates in which the etcher depicted the nude female form disporting in sea or river, and here, in this tenderly charming picture of the mother guiding protectively her timid child through the wavelets out into the shallows, we see their bodies, softly enveloped by the shimmering atmosphere, silhouetted, as it were, against the glistening mass of water between them and the horizon, and this by the mere suggestive power of drawing with closely-laid parallel lines that carry their own illusion of form.

Here, then, was the etcher, with developing individuality of style, commanding a new phase of expression on the copper which was to become one of his most distinctive, the expression of his passionate delight in the beauty of woman's form in healthy life." 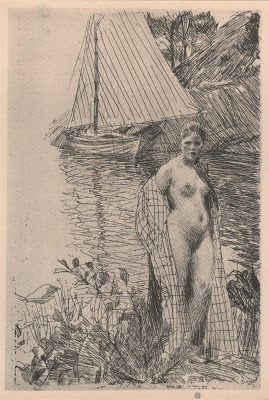