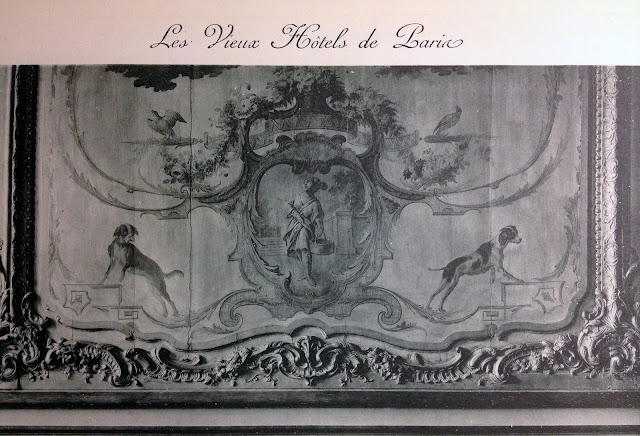 Famous for his magnificent monkey paintings - known as Singeries - Christophe Huet painted this extraordinary set of panels for the Hotel du Rohan, in Paris. Popular to this day, these cheeky and occasionally racy anthropomorphic painted scenes of monkeys cavorting in human garb were hugely fashionable in Eighteenth Century France. 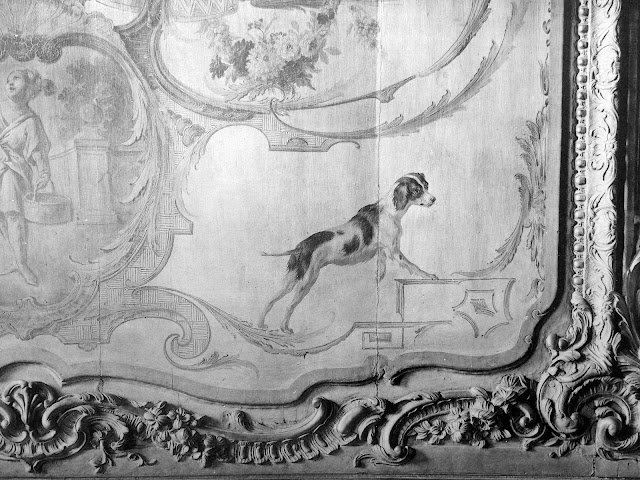 Though Berain and Audran were justly as famous in their day, Huet has perhaps been better remembered because of the quality of his surviving examples at the Chateau de Chatilly. Bertrand du Vignaud, head of the World Monuments Fund in Europe, says, “I consider the Grand Singerie the most important décor in the chateau,” claiming that “It is Huet’s masterpiece." 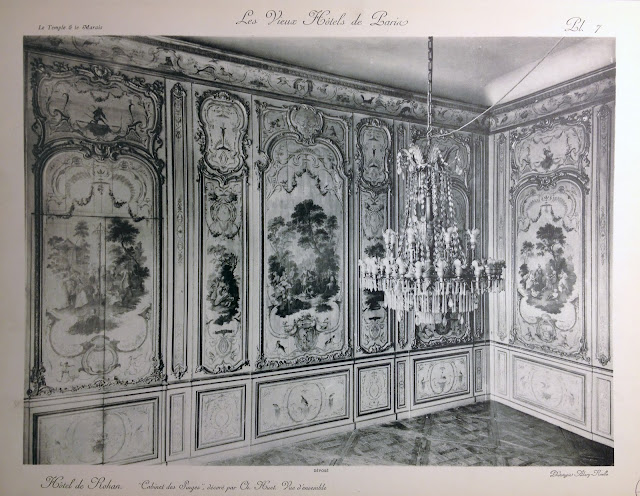 I was thrilled to come across this practically unknown set of phototype plates of his Cabinet des Singes for Rohan from a volume called Les Vieux Hotels de Paris, printed in 1905. One of a series of large folios containing beautiful prints, these books were an attempt to archive surviving examples of interior and exterior decoration around Paris at the turn of the 20th century. 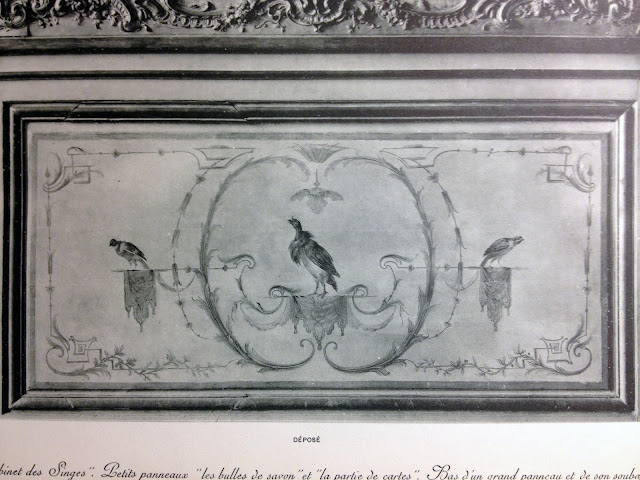 His work at the Hotel du Rohan is lesser known than Chantilly, but deserves recognition. Originally built in 1705, and home to successive cardinals and bishops, Huet's Rohan panels were eventually commissioned some time around 1750 by the Cardinal de Soubise, who gave the Hotel (by which term they mean mansion) a complete transformation. According to the book Debut de l'Imprimerie en France, Huet was assisted in painting the panels by Dutour, who painted the animals, and Crespin, who painted the landscapes. Huet is said to have painted the "flowers," by which I am assuming that means to include the ornamental borders and frames. 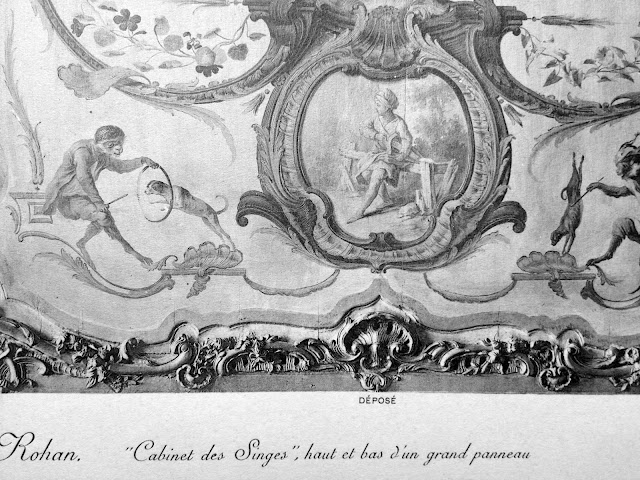 Those were heady times, to be sure. Marie Antoinette would regularly come poncing by for some cake with her entourage, before the whole party went tits up. Then, during the Revolution, it was placed into receivership and all its furniture and magnificent library were scattered to the winds. Later, after Napoleon had acquired it, the National Printing Press settled into it as their plush new 10,000 square meter HQ. It was eventually left to the National Archive in 1927, when Robert Danis was responsible for the gargantuan task of restoring the mansion to its former glory. Years of abuse, including the stripping out of the grand staircase to accommodate printing offices, left it a shell of its former self. Despite extensive efforts, much of the old decorations have not survived. 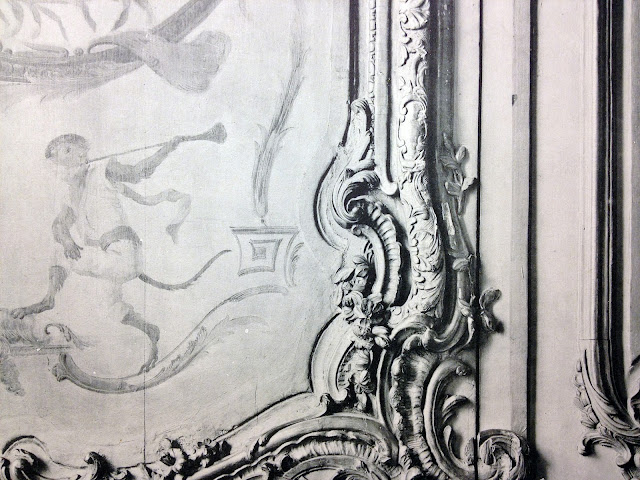 The panels have that unmistakable Huet look. His linework when seen up close and in black & white, has  the quality of an engraving that's received washes of color. 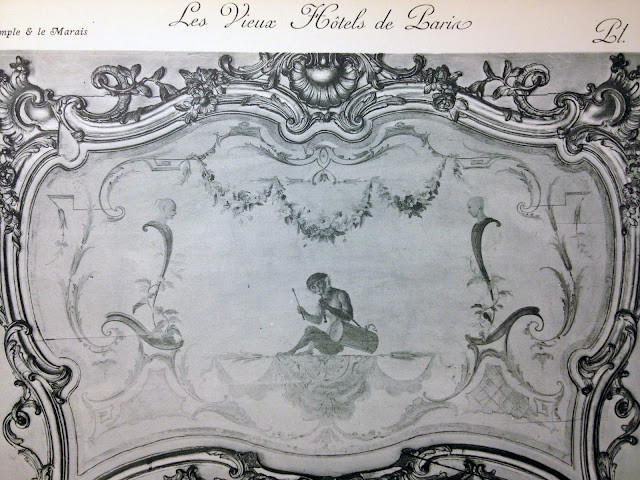 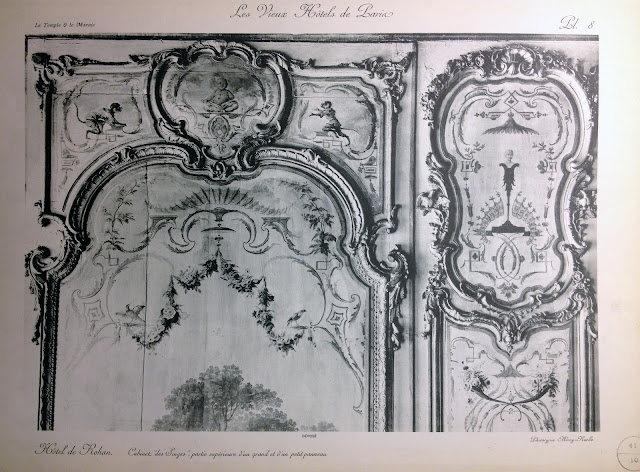 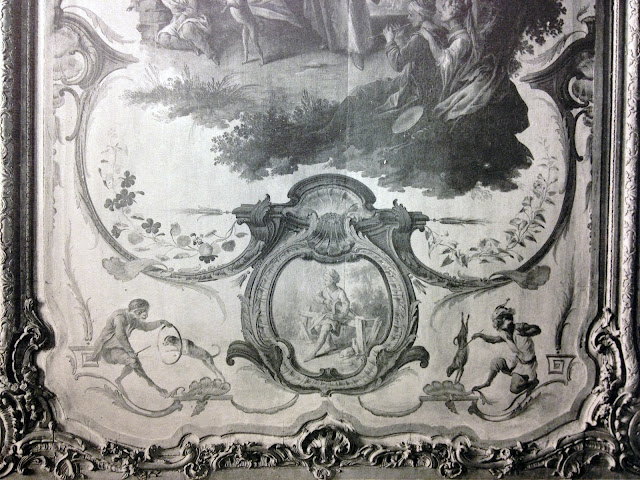 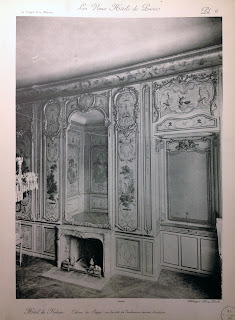 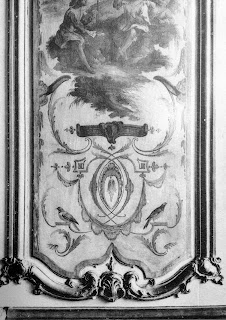 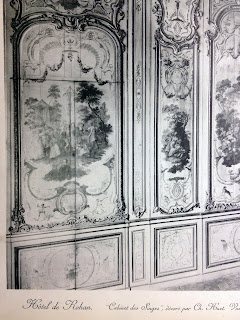 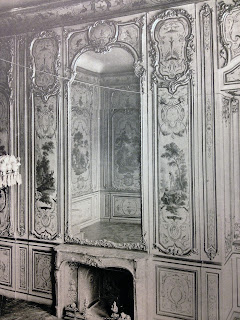