Arches appear in trompe l'oeil murals with predictable regularity. I don't know how many times I've sat in a bad Italian restaurant, staring at an appallingly painted Bay of Naples through some row of wonky arches. Overcooked pasta, bad wine, swirly stucco and a gilded gorilla on a glass pedestal staring me out as I go to the bathroom. We've all been there. With even the smallest of effort, however, these murals could be made better. Not good exactly, but better.


To begin with, I'd argue that the arch is not the best structure to imply depth. A single row of arches in the foreground, perpendicular to the line of sight and revealing a landscape behind (for example), creates two distinct planes. We are made aware of the picture plane itself, as signified by the arches, and we are made aware of the plane of the background. A distant landscape exists very much on a flattened plane. Murals painted according to this standard model are distinguished by two discrete planes, foreground and background, usually painted without much physically linking them. It's a very static and finite solution to creating depth. 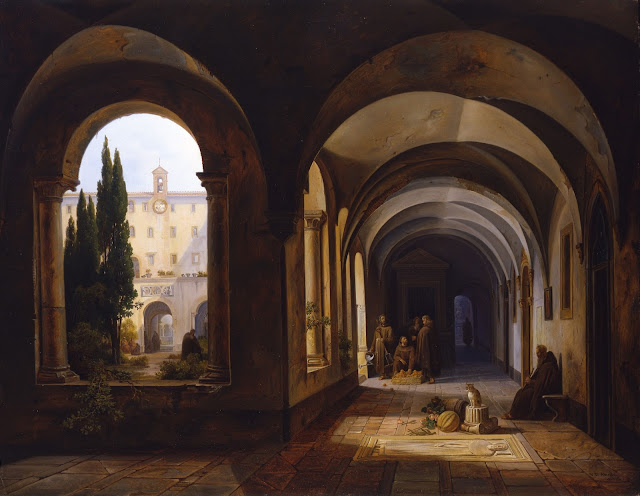 The vault, on the other hand, creates a continuous bridge between the foreground and middle distance. It may even appear to extend towards us, implying a continuous ceiling right over our heads. The painting above provides both examples in one. An arch revealing a scene (on the left), where the illusion of depth is created almost exclusively through use of value, and the receding vault (on the right), which uses both value and linear perspective to create its spatial illusion of depth. The scene on the left appears static, while the one on the right is dynamic.


The number of architectural structures that inherently suggest depth is quite small. If you want to create the illusion of three dimensions in an architectural mural or large-scale painting, you're pretty much limited to the vault.

A barrel vault may even extend all the way to the background spatially, as in the wonderful Baptistry doors by Ghiberti. The carefully delineated outline of a vault is all that's needed to suggest great depth, despite the actual relief being no more than an inch or so. The action stops at the altar, but or eye travels all the way to the back of the nave.

Massaccio's Trinity is a perfect example. The arch does nothing to create depth besides delineating a plane, it's the vault that creates the illusion that wows everyone.


"The cassetted vault was well known from the Roman temple of Maxentius and other buildings. It became one of the great themes of humanistic architecture. Masaccio used it in his Trinity, generally accepted as the first extant work in perspective. Borromini's use of a variant nearly two centuries later in the Palazzo Spada attests to the enduring fascination of this illusionistic form."" [Kim Veltman, The Sources of Perspective]

Architects such as Borromini,  Scamozzi and Bramante, understood that architectural trompe l'oeil was best served by the vault, using it to spectacular effect in their illusionistic built environments. 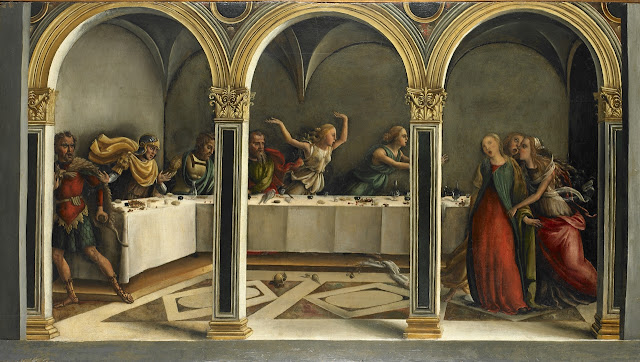 An arch is more of a decorative frame. It sits in the foreground as a mute barrier. Arches serve as portals, a decorative meme intended to entice us to walk through into the scene beyond. Taken on their own, however, they serve to isolate the viewer from the scene, acting more like a simple barrier than, say, a pathway running sinuously from us and disappearing into a landscape. A long barrel vault is the architectural equivalent of a forest path in landscape painting. Paths are irresistible. They trigger an irresistible urge to explore and see what lies around the corner.

Arches are not. I see an arch in a painting and I feel like there's going to be a red velvet rope with a bouncer telling me I'm not on the list. Whatever drama is unfolding in the painting above, we’re clearly not part of it, just as I'm viscerally aware that I am not invited to Veronese’s Feast at the House of Levi. I'm a spectator, not a participant. On the other hand, Raphael’s School of Athens makes me want to march right up those steps to join those conversations in the crowded vault.

Veronese circumvents the static nature of the single row of arches in the foreground by plonking a second row directly behind it. This implies a vault running perpendicular to us between the rows of arches, and creates depth. If the architecture is to run perpendicular to the line of sight, then it's a handy little trompe l'oeil trick to simply place a second row. Notice (below) how much depth is implied by adding the second row of columns.

Colonnades running away from the viewer, along the lines of sight, imply great depth. "By the end of the (Fifteenth) Century, artists such as Bramante realized that the representation of colonnades was particularly suited for perspectival purposes because these permitted one not only to look into but even look straight through a space." [Veltman]

And, of course, the last word goes to Raphael. As if there was any question on the matter. He pretty much closes the argument. How tempting it is to march up those steps and enter the vault, listening in on the conversations of all those great thinkers. Notice too, how Raphael has chosen to position his key players at the precise point of greatest implied depth in his painting. He knew that we are viscerally drawn to the "deepest" spot, and planned the hierarchy of his incredible painting accordingly. Another example of how depth is intrinsic to composition. 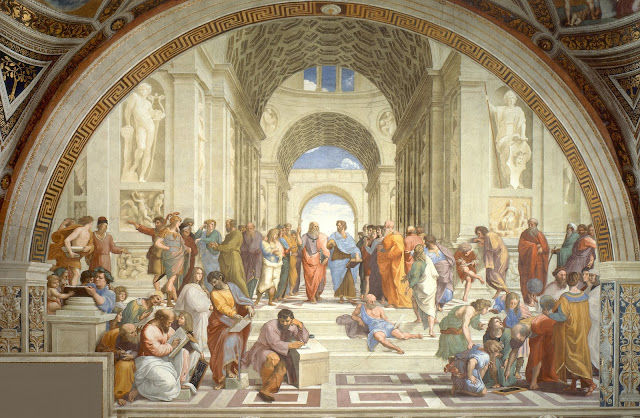