How to Draw the Acanthus: Drawing Shadows (Part IV)


George Smith, "Furniture Draughtsman to His Majesty", produced an incredible volume of Plates in 1826 "comprising instructions in the elementary principles of Ornamental Foliage enabling the student to draw with facility and correctness in this so generally useful branch of the Art."

Of course I had a camera hidden in a loaf of bread when I went to study these fabulous engravings. I guess I could have bought a copy online for $2,750, but I'm still holding out for a time-machine so I can buckle up my pantaloons and race down to Jones & Co. in London with a shiny new Guinea in my purse to purchase a copy of Mr. Smith's new and "elegantly colored" hand-engravings, fresh off the press.

I'm including here his engravings of the Acanthus as Part V in an ongoing series describing how to draw the Acanthus and other ornament. In this instance we'll take a brief look at how to lay in the shadows.

Fig. 1 shows the delineation of the outline of the Acanthus ornament. The design is taken from an example of the Corinthian Capital as existing in the arch of Titus, in Rome. Of note is the calligraphic quality of the line. Though it was copied from a stone carving, Smith has rendered his ornament with fluid, organic lines. I also love how carefully he delineated the flutings (a,b and c)and the principal fibres of the stem.

Having prepared three tints necessary for painting the shadows, according to value, Figure 2 shows us how the first (or lightest value) of these shadow tints is laid in. Using a full brush, Smith washes the broad shade of the leaf from the turnover. Note how the same shade is used to also wash in the broad shadow cast outside the leaf.

Proceeding to his second shadow tint in Figure 3, Smith continues to lay on his shadows. We can see that he omits tinting the projecting parts such as the stems and fibres of the leaves under it's shadow, as marked in Figure 3 above as 1,2,3 and 4.

Smith reserves his darkest shadow value for the tight whorls of the leaf, and narrow areas where the fibrous stems are closest together. Use dark shadows sparingly, or your grisaille ornament painting will appear stiff and angular. Remember that we're painting foliage not stone, in this case.

Also notice that there is reflected light cast from the background onto the left side of the leaf. Smith omits painting his darkest shadow tint on these areas to render the effect of reflected light.


Used in combination with this post showing painted examples of grisaille ornament from that era, you should be able to see clearly the steps involved in the painting of this type of ornament. Below is a beautiful example (from that post) of the technique described above, with the added inclusion of a painted highlight. You can clearly see the steps involved as described by Smith to create cast shadows and reflected light with no more than three or four shadow tints and a fifth highlight. 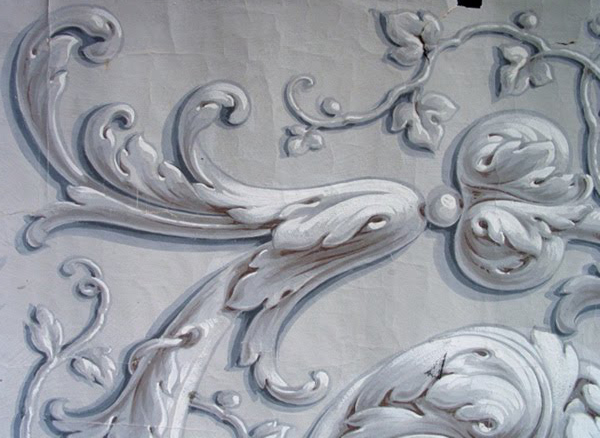