The Future of Arts Education 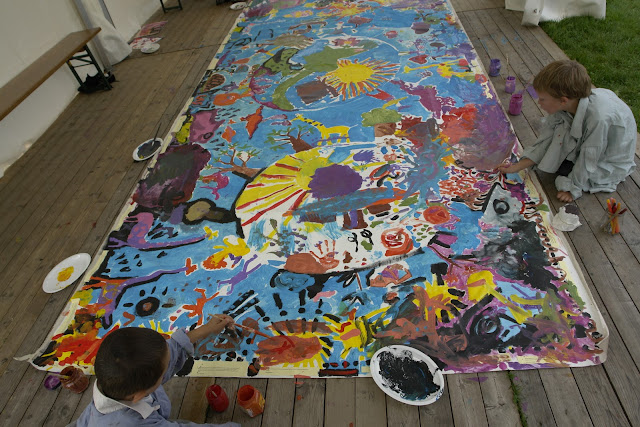 Did you know?
"Students receiving arts-based instruction for at least 3 hours on 3 days of each week are 3 times more likely to be elected to class leadership positions." Dr. Shirley Brice Heath, Stanford University, 1998.

"Employers (56%) and superintendents (79%) agree that a college degree in the arts is the most significant indicator of creativity in prospective job candidates." Ready to Innovate, 2008.


For some technical reason, email subscribers to this blog seem to see nothing but a big black space whenever I embed videos. This TED speech by Ken Robinson is well worth watching (if you're not already one of it's 3,000,000 + viewers). If you can't see the video on this post, you can watch it here.


The nitty-gritty...
How do you feel about your education in the arts? If you're anything like me, you were told to stop wasting your time with all that painting, and go learn something that will earn you a living.

A scathing report on the present state of arts education was released last year by the NORC detailing the decline, and outlining recommendations for sweeping reform, of our current approach to education and the arts.

"After a century of steady growth both in schools and out, there has been a significant decline in the proportion of American children who have taken classes or lessons in the arts. In 1930, less than a quarter of 18-year olds had taken any classes or lessons in any art form during their childhood. By 1982, that figure had risen to sixty-five percent. But by 2008, and throughout a period of heightened concern and effort to improve schools, particularly those serving low-income children, it had dropped below half again, and the decline shows no sign of abating."

"Arts education among white children is down only slightly since 1982. The decline has been precipitous, though, among African American and Hispanic children. They have absorbed nearly the entire decline." (Rabkin & Hedberg, 2011) Some analysts of their research tells a re-assuring story of adult arts participation, but it's children and the arts that are seen to be in rapid decline. 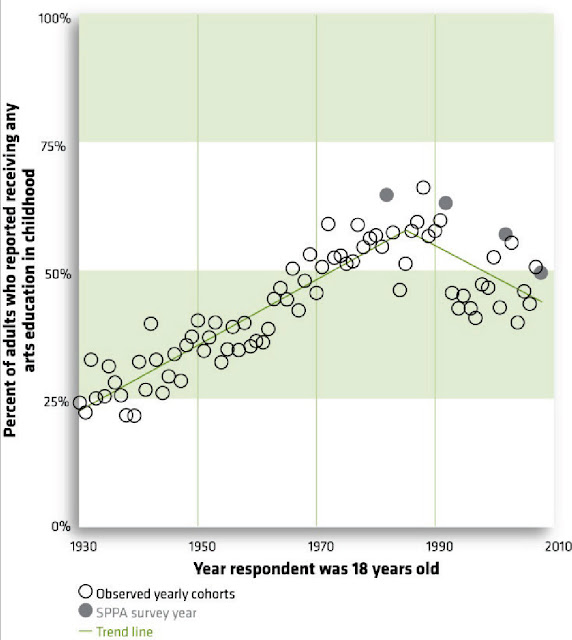 Rabkin et al tell us that "among the art forms, the decline has been most serious in music and visual art, the two disciplines most commonly taught in schools. Simple deduction leads to the inescapable conclusion that the decline in childhood arts education has been most dramatic and concentrated in schools that serve African American and Hispanic children. There is a virtual arts desert in many of the schools they attend."

Indeed, not only has there been a significant drop-off in Arts education, there is also a concurrent drop-off in audience numbers for Arts events and activities. According to the NEA, "American audiences for the arts are getting older, and their numbers are declining". Some of that may be accounted for by the recent recession, but the numbers are still pretty stark. 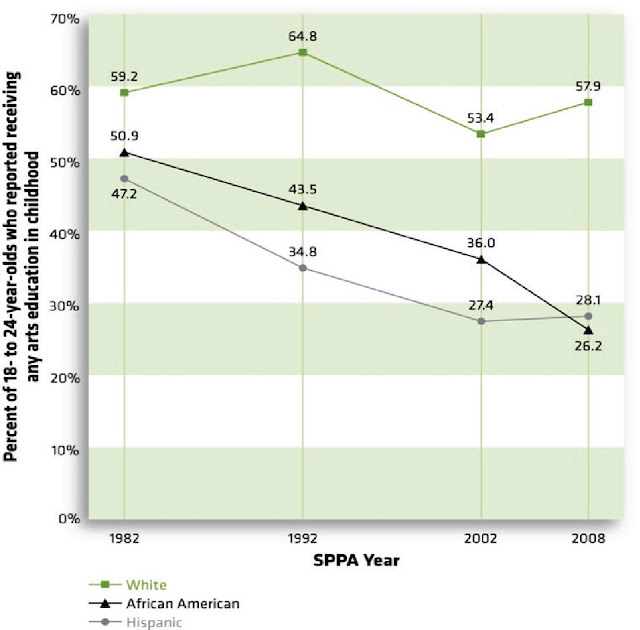 Other data I found fascinating were the figures relating to gender participation in arts-related activities. According to NEA Director of Research and Analysis Sunil Iyengar, "The NEA’s own Survey of Public Participation in the Arts (SPPA) and related studies have long chronicled the gender imbalance favoring female versus male attendance at many types of live arts events.  Monitoring the Future suggests that the difference becomes apparent even before adulthood. From 1990 to 2005, roughly 30 percent of female 12th-graders did music or other performing arts activities after school, compared to only 17 percent of males." Furthermore, according to NCES, "female students also outperformed male students in creating visual art", where "the average responding scores for female students were 10 points higher than for male students in music and 11 points higher in visual arts."


"93% of Americans agree the arts are vital to providing a well-rounded education for children."
Harris Poll, 2005.
"There’s not a straight line between the crochet club and the Ivy League", says June Kronholz, "but a growing body of research says there is a link between after-school activities and graduating from high school, going to college, and becoming a responsible citizen".

Despite Kronholz' assertions, and faced as we are with sweeping budget cuts, I find little reassurance that NELS is working on a soon-to-be-released study exploring possible links between extracurricular arts engagement and positive academic and social outcomes. I worry that Washington sees things differently to the American people (and the statistical evidence) on this issue.

Ever since A Nation At Risk, the infamous Reagan-era 1983 education reform study that claimed a "rising tide of mediocrity" in our Nation's schools is posing a national security threat, arts education has taken a real pounding. The report, when it bothered to mention the arts at all, suggested that they are nothing but a distraction from the real business of schools. That opinion has been shaping policy in arts education ever since.

And yet, over and over, research has strongly and consistently associated arts education with higher student achievement. "Careful evaluation of program after program has shown that learning in the arts is strongly correlated with improved student behavior, attendance, engagement in school, critical thinking, problem solving, creativity, social development, and, yes, even test scores." [Rabkin, 2011]

I don't get it. The system is failing, and everyone knows investment in the arts will help. Even Arne Duncan himself recently wrote that “education in the arts is more important than ever. In the global economy, creativity is essential. The best way to foster that creativity is through arts education.”

This is certainly a very challenging time for education, but the pendulum that swung away from the arts during these last three decades of school reform may swing back if values like creativity and innovation are more broadly embraced as essential purposes of education. Thank you, and good night America.

You still reading this? More of the NEA findings...
There are persistent patterns of decline in participation for most art forms. Nearly 35 percent of U.S. adults – or an estimated 78 million – attended an art museum or an arts performance in the 2008 survey period, compared with about 40 percent in 1982, 1992, and 2002.
Aging audiences are a long-term trend. Performing arts attendees are increasingly older than the average U.S. adult (45). The aging of the baby boom generation does not appear to account for the overall increase in age.
Educated Americans are participating less than before, and educated audiences are the most likely to attend or participate in the arts.
The Internet and mass media are reaching substantial audiences for the arts.