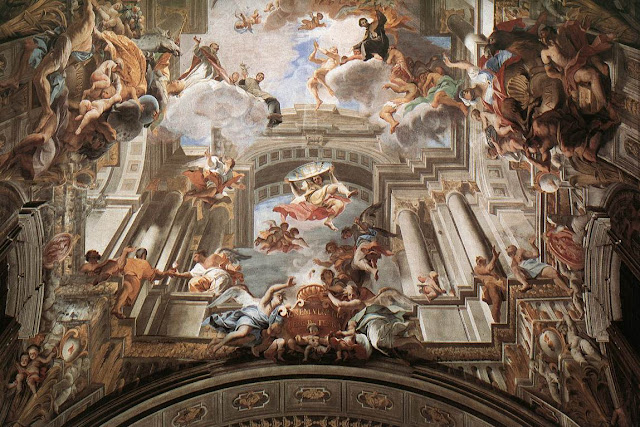 At first glance it's hard to grasp what all the fuss is about. Puffy clouds and putti? Yawn. Looks like art by another dead guy. But it's an odd feeling the moment you realize you've been truly fooled. All those 3-D street-drawings forwarded by my aunt left me numb to the fact that anamorphism is hard to do well. There's something about watching reality on a computer that makes it seem a little, I don't know, unreal.


The truth is: there is not a single painter alive who is fit to sniff Andrea Pozzo's pants. There, I said it. The depth of his knowledge is breath-taking, to say nothing of his incredible talent as a painter. I'm not saying he was the greatest - I don't think he was - just that we're all rubbish by comparison. But the good news is that we can learn from him because he wrote a lot of it down.

Prying open his original volume of writings on architecture in perspective, bound in debossed pigskin, and peering at the arcane knowledge in Latin and German is like a looking-glass to another world. We're left, like peasants staring up at the ancient ruins of the Greeks, to suspect that aliens must have had a hand in this, because no mere human could possibly have conceived and created something of such greatness.


Andrea Pozzo painted his most famous work, the illusionistic trompe l'oeil ceiling of San Ignazio, in 1685. He waited 21 years until 1706, just three years before he died, to publish his methods for creating this dizzying trickery. His book was instantly, and hugely popular. There's no show-boating; he simply and clearly begins with the most basic linear perspective, and proceeds to step through the process with more and more complicated geometry.

But how did he counter the distortion to his artwork by the curvature of the vault at San Ignazio? If he just painted his flat design onto a curved ceiling, it would look hopelessly distorted and unconvincing from below.


To create his masterful illusion, he began by constructing - as an architect would - the elevations for the building, but in Pozzo's case he was imagining a building that would probably never be built. He meticulously designed the construction as if it actually existed in space, to the point where he could literally build it if he wanted to. In the case of the cupola of San Ignazio, he even offered to build the real thing. His illusion would add an additional three floors of height to the main ceiling.

Once he had his elevations drawn up, he applied the rules of linear perspective and came up with a drawing of how the building would look if viewed from directly below [Fig. 1]


Next he simply laid a grid over his entire drawing. He now had a map of how the ceiling would be painted if it were flat. The only problem was that the ceiling at San Ignazio is not flat, it's a hemispherical barrel vault. To counter the curvature, he had to use a little anamorphic projection. What he needed to do was to make his grid appear to be correct at a height that corresponds with the top of the actual wall, right below the curved vault. To do that, he imagined a grid (the red grid in Fig. 2) at the height of what would be a flat ceiling (if it existed).

I placed our viewer at a the center of the room [A], but we could decide to place him anywhere. As long as the position is known, the effect will work. Pozzo worked out his perspective illusion the same way, and marked the optimum viewing position with a brass plaque on the floor.

Anamorphism is a detailed subject, and I'm only skimming the surface here. The steps we are taking here will correct the distortion on the x axis, and create lines that appear straight even though they're painted on a curve. In the case of San Ignazio, I believe Pozzo only corrected for the x axis, not the y.

For now, let's take a look at a cross-section of our room with the barrel vault [Fig. 3], which should of course be drawn to scale. Lines radiating from eye level travel through the red points on our grid and hit the curved vault. These are our new grid points.


If Pozzo had also corrected the y axis it'd have looked something like Figure 4, but I don't believe he did. You can see that if we did that, our new grid points (green) on the y axis would start to creep down the end walls of the church. This would cause it's own problem not worth solving (or maybe I'm just feeling lazy). Instead, why not simply retain our original points on the y axis and let distance do the trick? Like this...

If we maintain the original grid on the y axis (as in Figure 5), and project our points through to the curved ceiling on the x axis, then when we stand in the middle of the room we'll get a convincing trompe l'oeil effect of a ceiling receding more-or-less correctly in space.


In Fig. 6 you can see original dimensions along the y axis are preserved, but that we've distorted the grid along the x axis. All that's left to do now is to apply the visual information from our original gridded drawing to our new grid, square for square. Mark your ceiling with the new grid, and start painting.

I said that our solution is "more-or-less" correct because the reality is that a gigantic grid floating way above our heads is subject to distortion that makes it appear like the grid in Figure 7.

Here, Point A represents a point directly over our heads. You can see that the squares directly around the center are the least distorted. That's because they're on a plane that's perpendicular to our line of vision. As the grid recedes equally in all directions, it gets progressively more and more distorted by distance and a skewed picture plane.

This can be corrected for, and the good news is it's not that hard. If it was, we wouldn't have so many 3-D chalk drawings flooding our Inbox.


You can easily see what I mean in reality in Figure 8, where the camera's wide angle lens preserved the same optical distortion. Pozzo's ceiling appears to bubble down towards us in the center.

If we were to shrink and lower that big red grid along our sight line so that it floated closer over our heads, our artwork would appear to distort less. We could continue to shrink and bring that grid even closer to our eyes, and each time the skewed distortion would lessen. 3-D chalk artists position their grid so close that it's on the same plane as their 'eye' (the camera). If there is no distance at all between the eye and the grid, then the 'surface as surface' disappears completely, and the illusion is complete.

This is the secret to their creating those illusions in chalk of standing on the edge of a yawning crevasse or whatever.

This topic is really too big to go into fully in a blog post. You're going to have to wait for the workshop for that. I feel like I'm skipping around and not really explaining fully enough to be useful. Steps 1 through 6 above apply to the problem posed by Pozzo's ceiling in particular, and are not applicable to every situation of Anamorphism.

But to create a true anamorphic illusion, you have to imagine that you are floating inside the center of a very large transparent sphere. All around the inside of that sphere are equally spaced little dots that form a grid. We perceive the world through this grid. Using this idea, a perceptually truer projection correcting the curve of the vault is represented by Figure 9. See the difference between that and Figure 3?

Hmm, I see that I'm getting off topic and that this post is getting too long and I didn't even get to how he did the cupola yet. It's Sunday morning and I haven't even had my coffee yet.

By the way, you can download a full PDF of Andrea Pozzo's book (Latin and English version) "Rules and Examples of Perspective proper for Painters and Architects" here.