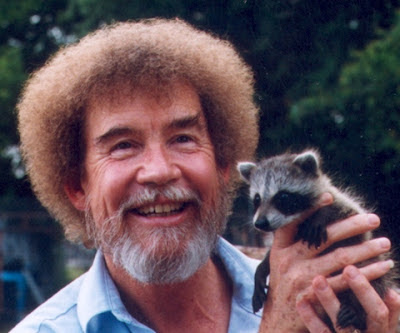 Was Bob Ross really that happy? Despite finding a family of raccoons evidently nesting in his afro, he certainly seems to have maintained a positive outlook.

"The powerful motivator in our lives isn't money;
it's the opportunity to learn, grow in responsibilities,
contribute to others, and be recognized for achievements."
Frederick Herzberg

I made a big headline out of Herzberg's quote not because I'm convinced he's right, but because I'm not entirely convinced. There's some truth to the notion that we are fanatically dedicated to our beliefs precisely because they are in doubt. Nobody's 100% dedicated to something they have complete confidence in. You don't see anyone standing on a soapbox shouting that the sun is going to come up tomorrow.

Having spent the last two days in a cramped closet painting over-sized faux malachite in oil, I'm not sure I'm in the right frame of mind. I can barely blink my eyes at the same time. I'm more likely to wake up in my car somewhere near Newark airport with a cop shining a torch at me, followed by high-speed chase and death by fireball.

So I was interested in a recent study that claims these results in Job Satisfaction:

Number 8 was interesting, of course. If you combine this study with the one that says 'Business Owner' is the Number 1, then I should be playing the pan pipes, skipping to work and reciting poetry about unicorns. Business Owner and Painter? The Perfect Storm of double happiness. Wahoo.

On the other hand, as a decorative painter I'm equal parts 'painter' and 'construction laborer', of which the study says:


Oh well. Back to the front.

Aristotle spent a lot of time thinking about stuff [you heard it here first]. His guiding question was always 'what is the best thing for a human being?' His answer: happiness. "Happiness," he wrote, "is the best, noblest, and most pleasant thing in the world." James Skeen writes that "when Aristotle talks about happiness he is not talking about the mere psychological satisfaction that comes when we get what we want.  He is talking about human flourishing, a thriving that is based on moral and intellectual excellence."


But what exactly is the greater issue here? You might be tempted to draw a common thread through the list above, but it'd be a tenuous one. Priests, Firefighters and Teachers could be said to be working for some greater good. Authors and Painters? Maybe it's down to freedom of expression leading to contentment, or just the ability to hang out in your underwear all day long.

“This congruence of belief, values, and actions in one’s daily work can be immensely satisfying," says Rev. Cynthia Linder. “The most satisfying jobs are mostly professions, especially those involving caring for, teaching, and protecting others and creative pursuits,” said Tom W. Smith, Director of the General Social Survey (GSS) at the National Opinion Research Center at the University of Chicago. The survey is the most comprehensive of its kind to explore satisfaction and happiness among American workers.

Or perhaps it's simpler than all that. Perhaps money does buy you happiness: While one poll of 'happy' countries shows a correlation between the wealth of it's populace and their general level of well-being, it shouldn't be surprising that another poll "finds countries with the highest well-being tend to be the most peaceful countries in the world and those with the lowest well-being are the least likely to be peaceful." [A Worldwide study of well-being by Gallup shows a high of 72% in Denmark to a low of 1% in Chad]. 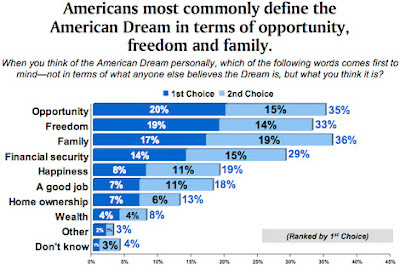 Renowned British economist Richard Layard published a book last year called (not surprisingly) "Happiness" in which he discussed one of the surprising results of a bunch of tests he ran: money doesn't make people happier. The only time people's subjective well-being rises as a result of cash is when the money takes them out of poverty. Middle-class people who become upper-class, however, don't report feeling any happier.

Despite our becoming generally wealthier as a country, Americans are known to be a lot less satisfied with their jobs than they were 30 years ago. It seems that it's not enough to simply still have a job in a recession, we all want more.

"As it turns out, when a nation’s GDP rises above $10,000.00 per capita there is no relationship between GDP and happiness." [source]

I remember reading about a study done on a bunch of kids. Before the study started, they were asked to rate their 'happiness' on a 1-10 scale. They voted about a 6. They were then told that they were each to be given a free gift. Yay! They had to reach into a bag and blindly pick out a surprise. There was one gift for each child. Once they'd each taken a turn at the grab-bag and claimed their gift, they were polled once again for happiness. This time, Their happiness came in at about a 4.

What had happened? Despite the fact that they were now materially richer than they were a couple of minutes ago, they were less happy. If they'd been left completely alone, they'd have been happier. Perhaps they were now in a position of having made a personal choice, and confronted with the realization that they had chosen poorly and were now jealous of the people around them. If the choice had been made for them (or if they were never part of the study to begin with), it'd have been smoother sailing.

The kind of happiness referred to in the study above is a crass, low-minded want/satisfaction duality where saint and criminal can be equally satisfied, but it still made me wonder whether the spoiled modern dissatisfaction with our lot has something to do with this way of thinking. 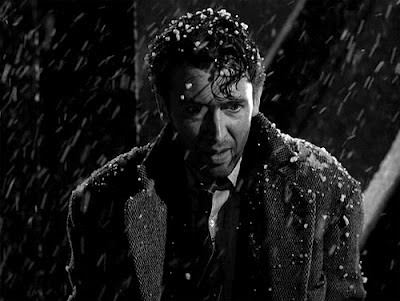 We all want to be captains of our own destiny, but there's a certain existential price that comes with that: What if we've taken the wrong path? Unfortunately, we aren't given a window on our lives like Jimmy Stewart in It's A Wonderful Life, so it's impossible to discern whether or not we've made the 'right' choice.

European governments, worried that their best young people would leave for America, distributed posters like this to frighten them. This 1869 Swedish anti-emigration poster contrasts Per Svensson's dream of the American idyll (left) and the reality of his life in the wilderness (above right), where he is menaced by a mountain lion, a big snake, and wild Indians who are scalping and disemboweling someone.

Richard Wilkinson, a British professor of social epidemiology, recently stated on PBS NewsHour, "if you want to live the American dream, you should move to Finland or Denmark, which have much higher social mobility."

"Americans may be deeply divided about what ails our country, but there's no denying we're a nation of unhappy campers." Kerry Trueman writes. "Danes, on the other hand, consistently rank as some of the happiest people in the world, a fact attributed at least in part to Denmark's legendary income equality and strong social safety net."

But I can't help feeling like this chatter is all getting a bit vague and obtuse. What if I just run off and join the clergy? They're at the top of the list. Would that make me happy? Maybe.

That and huge bag of cash.