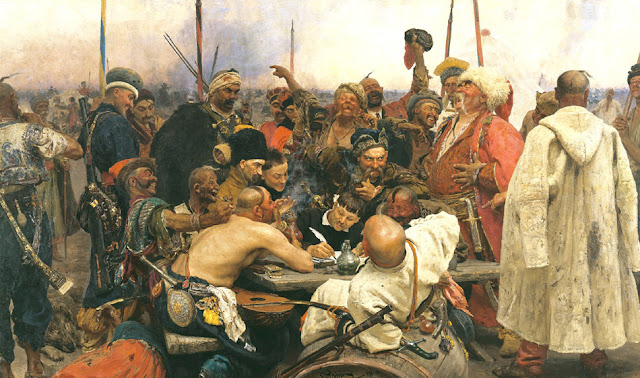 Ilya Repin famously portrayed the Cossacks as lusty brigands with sharp wits and even fouler tongues in his masterpiece, Zaporozhian Cossacks writing a letter to the Turkish Sultan.  The subject of the painting is the Cossacks refusal of the demand by the Turkish Sultan for their submission to his authority, and is a masterfully realized study in character.

It's easy to get lost in the theatricality of Repin's characters and forget that this painting was based on historical events and very real tensions between Russia and Turkey (which accounted for some of the popularity of the painting too). At the end of this post I reproduced the hilariously vulgar text of the actual letter. It reads like the whole "your mother was a hamster and your father smelled of elderberries" sketch from Monty Python and the Holy Grail.


Ilya Repin (Best Of), was published to great reviews by Parkstone Press in 2011 and was initially offered for less than $20 but has since shot up to well over $200 on Amazon. I did some digging and found that Deepdiscount still has a few copies for the initial price ($15.97 with free shipping) so go grab yourself one, now!

"In the drawing above, Study for ‘Zaporozhian Cossacks Writing a Letter to the Turkish Sultan’, the bald headed Zaporozhian warrior sits to the left, in a similar pose to that in the final work. It is interesting to note that in the present pencil study, and other oil studies of the final painting¹, he is fully clothed. Repin’s decision to depict him bare-backed in the final painting was no doubt a way of accentuating his boorishness, and also a way of adding a further dimension to his character, by presenting him as a gambler - without his shirt on he could not hide any cards up his sleeves. This character was modelled on a schoolteacher, Konstantin Belonovskaya, who was a friend of both Repin and Professor Yavornytsky.

The figure with the fringed hairstyle in the present study is turned around to face us in the final painting, and becomes the scribe. The model for this particular Cossack was the aforementioned Professor Yavornytsky himself, the hairstyle giving him a suitably studious air. It is reputed that Professor Yavornytsky was in a very glum mood when he arrived at Repin’s studio to pose. In order to coax a wry smile out of him, as seen in the final painting, Repin gave him a magazine with cartoons in it to read during the sitting." [source] 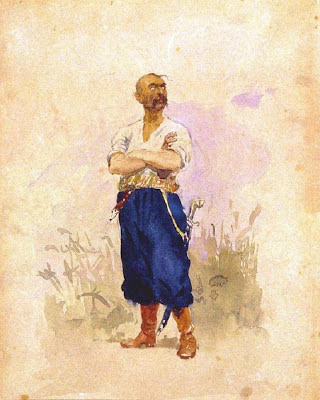 "Repin began the painting in the late 1870s but did not finish it until 1891. When completed, it was bought by Tsar Alexander III (1845-1894) for a record price of 35,000 roubles. The painting depicts the Zaporozhian Cossacks composing their legendary reply of 1675 to Sultan Mohammed IV’s (1642-1693) request that they surrender.

The final work was painted at a time when Turkey was still implacably opposed to Russia, and thus tapped into contemporary public sentiment. Repin sought to recreate the scene with great historical accuracy, and meticulously researched this moment in history with numerous historians, including the renowned expert, Professor Dmytro Yavornytsky (1855-1940). 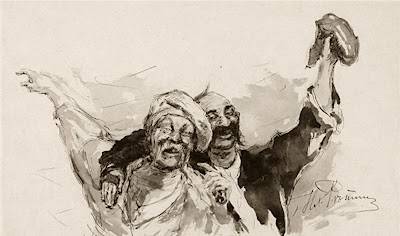 "In the final painting, each of the Cossacks jostles around the central table desperate to contribute their own soubriquet for the Sultan, responding to and mocking his boasts. From the present study one already has a clear sense of how the final painting would shape up, with Repin experimenting with the positioning of a few of the key characters in order to achieve the maximum impact. The viewer can revel in the vigorous, animated interaction of the group, as one of the Cossacks, his head shaven and back bare, adds his own comments, gesticulating with his hand.

The group’s leader, Ivan Sirko (c.1610-1680), listens in intently, whilst puffing from his pipe, as the scribe jots down his every word, a wry smile escaping from his lips. The raucous laughter ripples through the group and is so tangible that it is little surprise to know that Repin had reputedly begun the painting as a study of laughter." 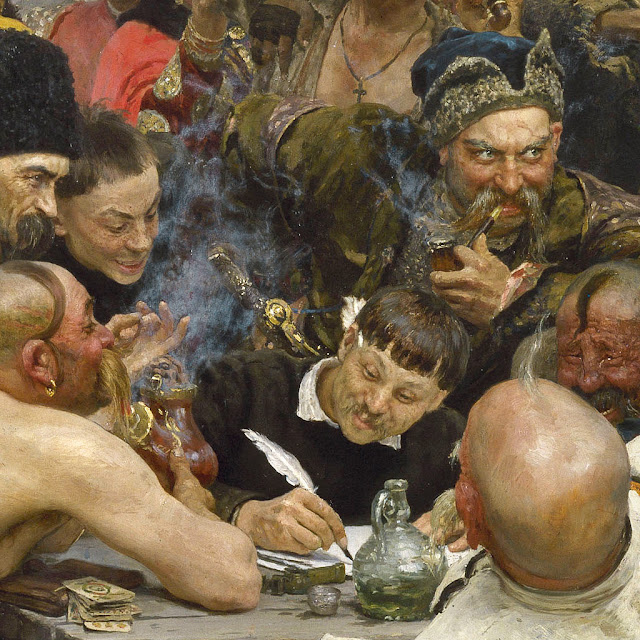 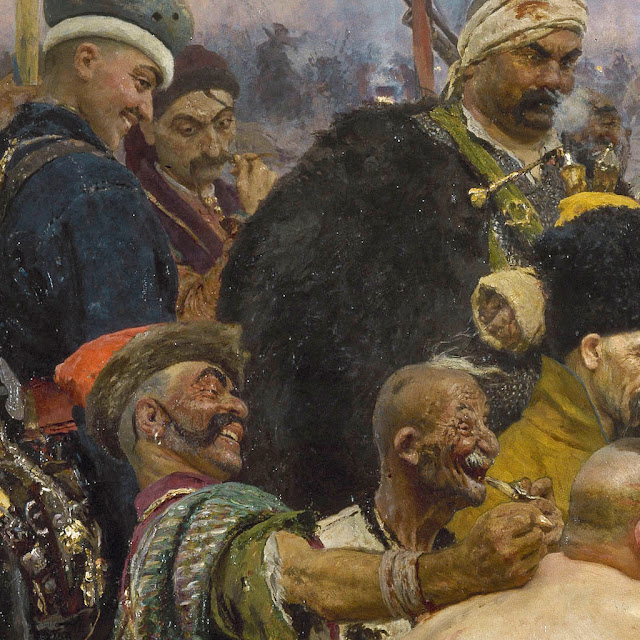 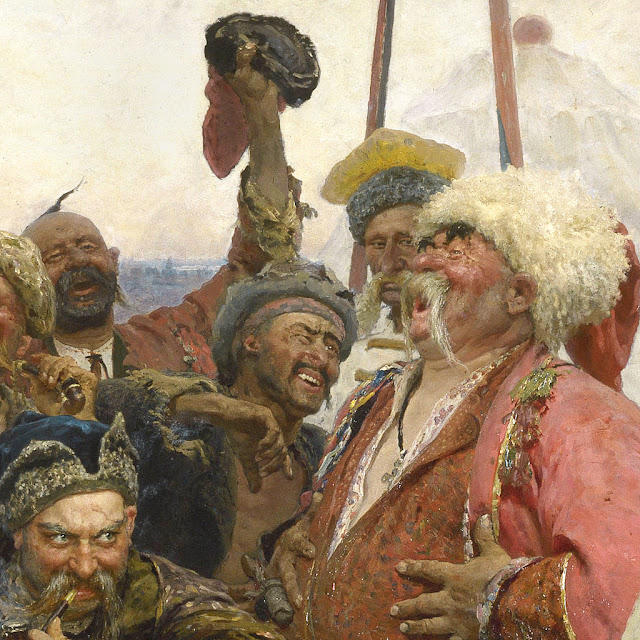 If you can't see the video below, then you can check out Andrew Graham Dixon's fascinating documentary on Russian Art, (including Repin and the Wanderers in this episode) here.


"As The Sultan, son of Muhammad, brother of the Sun and Moon, grandson and viceroy of God, ruler of the king sentencing of Macedonia, Babylon, Jerusalem, Upper and Lower Egypt; emperor of emperors; sovereign of sovereigns; extraordinary knight, never defeated ; stead permanent guardian of the tomb of Jesus Christ; trustee Chosen by God himself, the hope and comfort of Muslims; confounder and great defender of Christians-I command you, the Zaporozhian Cossacks, to submit to me voluntarily and without any resistance, and to desist from troubling me with your attacks."


" Thou art a turkish imp, the damned devil's brother and friend, and a secretary to Lucifer himself. What the devil kind of knight art thou that cannot slay a hedgehog with your naked ass? The devil shits, and your army eats. Thou son of a bitch wilt not ever make subjects of Christian sons; we have no fear of your army, by land and by sea we will battle with thee, fuck thy mother.

Thou art the Babylonian Scullion, Macedonian wheel wright, brewer of Jerusalem, goat-fucker of Alexandria, swineherd of Greater and Lesser Egypt, Armenian pig, Podolian villain, catamite of Tartary, hangman of Kamyanets, and fool of all the world and underworld, a fool before our God, a grandson of the Serpent, and the cricket in our dick. Pig's snout, mare's arse, slaughterhouse cur, unchristened brow, screw thine own mother!

So the Zaporozhians declare, you Lowlife. Thou wilt not even be herding Christian pigs.  Now we Shall conclude, for we do not know the date and do not have a calendar, the moon's in the sky, the Year in the book, the day's the same over here as it is over there; for this kiss our ass !"