Canaletto is known to have used Camera Ottica to mechanically assist in creating his cityscapes of Venice, but closer study reveals that that wasn't the end of the story. He manipulated the perspective in his scenes, sometimes changing the vantage point and giving a more flattened and distant view. Pushing the stationpoint back gives the viewer a more panoramic and flattened picture plane.

I call it Superman Perspective. It’s the flattened way things would look if you could see detail from a thousand miles away. In his “Westminster Bridge” painting, we get the sense that Canaletto must have used a high-powered telescope to see his subject. There’s very little evidence of linear perspective in the arches under the bridge. The closer you are, the more distortion will be apparent. In reality, you’d have to swing your head around to take in this whole scene, and the bridge would appear to balloon towards you in the center. Canaletto has made the artistic choice to straighten the bridge ‘unnaturally’.

It’s more impersonal, but it depends upon your goal. Maybe, in the end, the telescopic view speaks volumes about Canaletto’s personality. Perhaps he wanted to see the world from a distance, to rise above the cacophony of human interactions. For someone like Caravaggio, on the other hand, human drama was clearly the very stuff of life. He'd have us sit right at the table in Supper at Emmaus, involving us directly in the conversation. 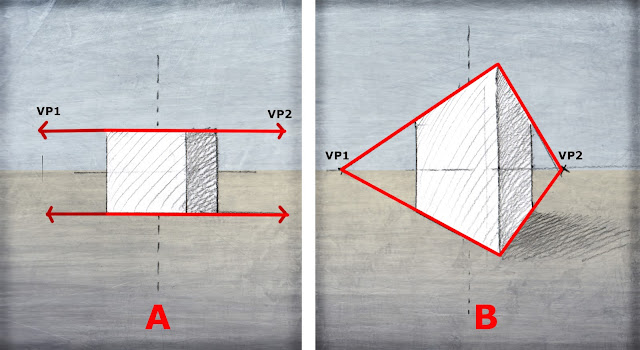 These cubes drawn in two-point perspective (above) illustrate my point. In A, on the left, the viewer is positioned a thousand miles away from the cube, viewing it as if with Superman’s supervision. The red orthogonals (lines drawn along receding parallel lines to the vanishing point) of the cube stretch out to some infinitely distant theoretical point on either side when presumably they would converge into Vanishing Points 1 and 2. The further away from the object we are, the further away the vanishing points are.

They closer we get to the object (or more accurately the picture plane), the closer to the centre line those Vanishing Points come. In B, on the right, we are so close to the cube that it’s sides have become completely distorted and are towering over us. You can see that the vanishing points (VP1 and VP2) are so close to the center line that they are visible within the frame. This is known in architectural draughting as “accelerated perspective,” because it gives an exaggerated sense of spatial depth. 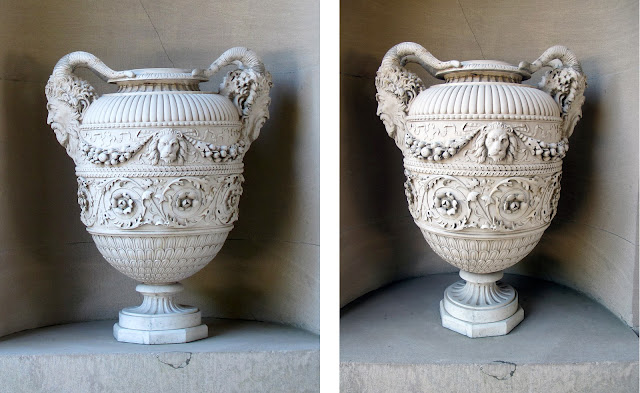 In both these photos of the same vase from the Vanderbilt mansion in Rhode Island, the horizon line is level with the lion’s head. However, there’s a difference: we can tell that the camera was closer to the vase in the photo on the right. How do we know? The orthogonals on the right photo recede to vanishing points closer to the center line. This creates the kind of distortion we saw in the cube illustration.

In a large mural of a niche, for example, we would want to paint the vase more as it appears on the left, regardless of the stationpoint of the viewer in actual space. Why? Too much distortion in a mural is ugly (that's just my opinion).  I'm not talking about anamorphism here (where the stationpoint strictly determines the construction of the paintings perspective), I'm talking about wall sized paintings in the style of the French landscape panoramas of Zuber et Cie. I'd argue that large murals are meant to be viewed from a distance, so our linear perspective should reflect that. 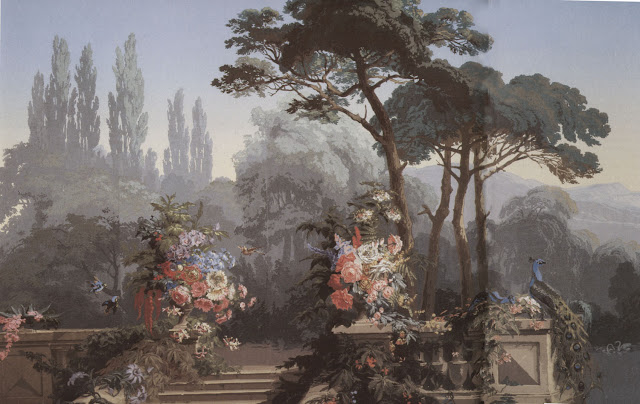