Gustave Caillebotte: Mystery in the Making

Every time I walk down the street, the most instinctive, primal part of my brain asks two questions of each person I pass:

The first question may just be a throwback to growing up in Dublin, where every approaching kid in the lane by the railroad tracks was a potential threat to this skinny art kid. It was always tense and nervy. The second is, well, just human nature. It's a fleeting nod to my simian side, and I don't have to act on it to recognize its existence. I'm a believer that we are animals first, and humans second. But maybe that's just me, I don't know.

Anyhoo: If the answer to both questions is "no," then I feel nothing and go about my day. But if the answer is "yes" to either one (and if I'm being honest), then there's a momentary charge in the air. Even the mutt in the painting seems to feel it. The point is; I believe that Caillebotte created his painting, "Le Pont de l'Europe," to deal specifically with this instant of primal recognition. The mystery that's endured speculation is; to which question is he answering "yes?"

The dress code may be different, but "Le Pont De l'Europe" depicts that same scene from the railroad tracks of my childhood, except that here it's a flaneur from nineteenth century Paris instead of some scumbag from Dublin.


The area around the railway station, Le Gare St. Lazare, was pretty seedy around the time. The protagonist (let's assume it's Caillebotte for now) is seen walking a couple of steps ahead of a woman dressed in black. Women dressed in this manner, and hanging out by the railway station in nineteenth century France, were assumed to be prostitutes. If we assume that this woman is walking alone, and that old Gus has simply passed her by on the street, then we can be pretty sure in this assumption as to her trade. Women rarely, if ever, would walk unaccompanied in so rough a neighborhood.

And if he is walking with her, why is he acting cagey and walking so far ahead? No well bred man would precede his companion. Either way, and despite the fact that she is looking at him, Caillebotte seems oblivious to her presence and is instead gazing at the man on the bridge.

Dressed in the blue and bowler hat of a laborer, perhaps he is simply lost in thoughts of work and life. Caillebotte the engineer and lifelong bachelor, might naturally have an affinity for this. But perhaps this man in blue - idle during what is after all the middle of the work day, judging by the shadows - is on the prowl for someone just like Caillebotte. The painting has been interpreted as two men cruising each other.


As if to prove my point, Caillebotte created this second painting around the same time. It's a wonderful cinematic moment that seems to capture the scene a few seconds after the first painting. Caillebotte has ditched his female companion (for it was never her that he was interested in), and has stopped by the man in blue. Is this just the engineer in him that's been distracted by the marvels of steel and industry on the horizon, or is he up for a little what-not in the hoo-ha with our man in blue?


Well, "who cares," is the obvious answer. But it's fun to speculate, and the air of mystery around the painting is much of its enduring charm. What's especially interesting is how he has used linear perspective to help construct his narrative.

He tampered with the reality of the actual scene, straightening buildings on the background that are in actuality oblique to the bridge, and widened the left of the bridge so that "the universe faithfully transcribed proves an illusion, and accuracy covers a lie." [Kirk Varnedoe]

"The superfluity of lines, which all seem to converge on the profile of the man, raises the question of what exactly Caillebotte was seeking to achieve through such unusual emphasis. Everything would seem to suggest that it identifies this man as the protagonist of a narrative encompassing the entire work." [Hirmer]

Various interpretations exist. Some say that this rigidly constructed scene "depicts a city that would have interested the Futurists, a place of dynamic intersections and personal anonymity, where human relationships count for nothing." [source]

"They seem to be quite alone," says Nicolas Sainte Fare Garnot, curator of the Jacquemart-Andre Museum. "Every person is lost in a very wide world." 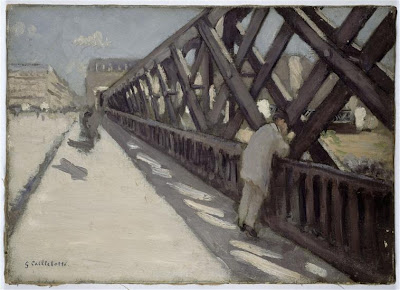 In an earlier painted sketch (above), the architecture of the bridge dominates and overwhelms the scene. Though we see the same man, it's hard for our attention not to be sucked to the back of the painting, towards Place de l'Europe.

This sketch seems to back up the "critique of modernization" interpretation, with its overbearing architecture dwarfing a faceless man. 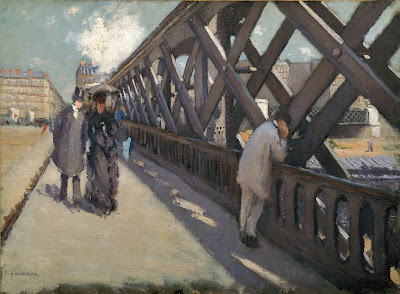 In another sketch, he's introduced a couple to stop our gaze from being distracted by the roaring perspective, and to draw our attention back to the guy on the right. Caillebotte paints the couple's heads at the same level, suggesting a whispered conversation regarding the other man's intentions. Perhaps this is the moment before a robbery.

He's instantly created narrative, and established that human interaction (or the lack of it) is precisely what the painting's about.


Comparing the compositions of the sketch and the final painting (above), the woman in the sketch (left) looks like a basketball player. She's massive. With her long dress, she appears to be even taller than him. This clearly wouldn't do for a gentleman to be dating a giraffe in 19th Century Paris.

But Caillebotte obviously wanted to keep those two heads close together and aligned with the horizon line in the final painting. Why? Maybe it's simply a compositional choice he made about the connection between their heads being more important than the distance between their steps.

In order to do that, and to remain true to linear perspective, he had to position the woman a few steps behind our protagonist so that she didn't appear to be as tall as him.

Maybe the painting is simply about a shared moment of intimacy between them. In the close up, he appears to be leaning back as if to hear what she's saying. She seems to look at him adoringly. We're also aware that there are other figures on the bridge. The tight bunching of heads along the horizon line emphasizes the isolation of the figure in the shadows. 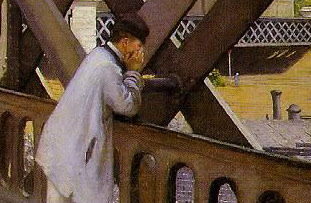 Suddenly, we've got it all wrong. Caillebotte is not the man walking with the woman; he's the man standing by the bridge. Isolated by the shadows and alone with head in hands, it's Caillebotte the sad loner.

"Modern life doesn't create close relations between human beings," Garnot says. "You are [in] complete loneliness in these new buildings, new avenues, new boulevards. There's something quite sad about that."

We'll never know the intended meaning of the painting. Caillebotte was known in his time as a collector of paintings and not as a painter, his work only becoming popular as late as 1950. He started painting relatively late, at age 27, and only lived to 45. A catalog from his Musée d'Orsay show states that "since the artist is dead, no amount of documentation will ever recapture a complete reckoning of his view of the world, or understanding of him as an individual."