How to Paint Reflections on Water


The post title is a tad misleading, as it is more about seeing and understanding than painting. Why do reflections appear longer in rippled water compared to smooth water? Why do reflections not appear at all in very rough water? Is there any quantifiable way for painters to measure the correct length of reflections, besides just painting a bunch of wiggly lines?

And if you feel like a little musical accompaniment while you wrap your head around some math, try Claude Debussy's "Reflections in Water."

I'm going to let my illustrations do most of the talking in this post. I hope that they're clear enough that you will be able to understand the principles just by studying them.

In Figure 1 above, there is a pole [AB] standing out of the water. You can imagine looking at it along sight lines that run through an imaginary picture plane. The top of the pole intersects the picture plane (the canvas you're painting on) at point A1. The visible bottom of the pole above the water would appear on your canvas at point B1. If the surface of the water was as smooth as a mirror, the reflection of your pole on the water would be painted on your canvas extending down to point C1. Notice too that the angles x, y, and z are the same when on a perfectly flat surface.


In the beautiful painting by Anders Zorn that opens this post, we see that the reflection of the boat extends downwards quite a bit below where one might expect. Why? Simply because water is never as smooth as it appears in our illustrations above. Despite what Caleb Bingham might have us believe (above), water almost always has some visible movement causing ripples or waves. These waves cause the reflections to distort and extend lower on the canvas.

The reflection of a pole in rippled water [Fig. 4] would thus appear to extend in a broken line all the way down our canvas to point D1. I hope that by studying the next couple of illustrations you can understand the effect of broken water conditions upon reflections.

In addition, rougher bodies of water appear to be brighter overall than smooth bodies of water. The fascinating reason has something to do with Galileo, and can be found in a separate blogpost, here.

Thomas Eakins, famously mathematical when it came to constructing his paintings, drew an illustration [Fig. 5] in one of his notebooks that shows why the reflections in rippled water appear "wiggly."

I've created my own version of the same phenomenon [Fig. 6], with some added notes that might help clarify what's happening. 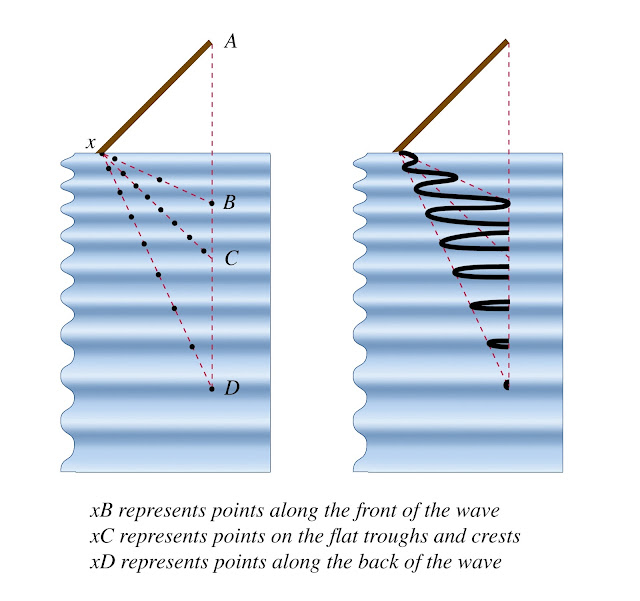