Despite the fatuous and dreamy description by Jules de Goncourt of the eighteenth century as being "the century of woman and her caressing domination over manners and custom," there is evidently some truth to the notion that women wielded influence over politics, culture, government and art at that time. Elizabeth-Louise Vigée-Le Brun spoke of her glory days in her memoirs, saying that "Woman reigned then: the Revolution dethroned them."


In the court of Marie-Antoinette, there were three reigning women artists. Along with Vigée L Brun and Adélaide Labille-Guiard, Anne Vallayer-Coster was one of the most prominent still-life painters of the day.

Bouquet of Flowers in a Terracotta Vase, with Peaches and Grapes (above) displays her mastery of different genres. In it we can see her combining elements of flower painting, still life and bas-relief imités. While her flowers are rendered in layers of delicate glazes, her terracotta vase is treated alla prima, with opaque paint and low impasto. 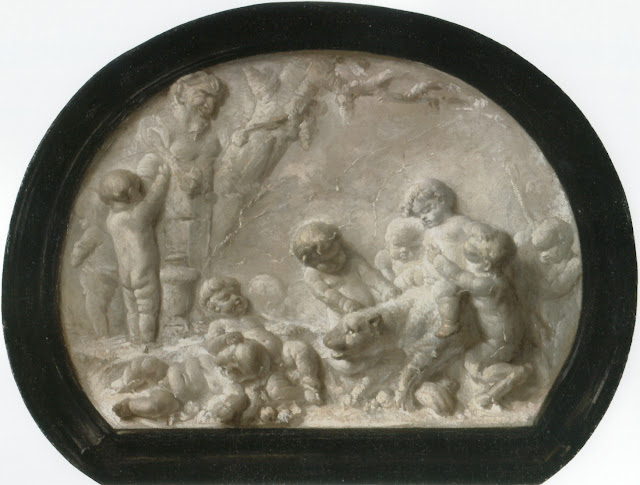 Perhaps no other eighteenth-century French artist rivaled Vallayer-Coster's facility in painting in a range of styles, particularly in the decorative genres of still life and flower painting.  Although I find her portraits to be weak, she elevated the traditional genre of flower painting to create works of exceptional refinement. I also believe her work as a trompe l'oeil painter has perhaps not fully been appreciated, so I'm concentrating here on some of those paintings.

Amazingly, she produced some of her most beautiful and masterly paintings before she applied to the Académie, at a time when she had neither frequented an academician's atelier nor even studied at the Académie. 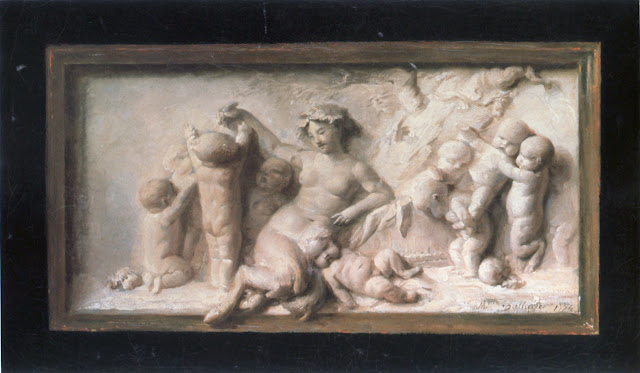 When painting her bas-relief imités, she first roughly sketched the forms with a liquid brown paint that served to delineate features and shadows. She then used impasto for highlights to create the illusion of three-dimensionality. I also love her trompe l'oeil frames, and the way her fauness rests her hooves on it in the painting above.

Given that Vallayer-Coster produced many versions of these scenes, there must have been a high demand for this type of work at the time. A second version of the same scene is shown in the painting is below.

Although she was clearly influenced by Chardin in her still life work, I hope you can see that with joyful paintings such as these, she never fell into slavish imitation. Her technique reflects that of an artist finding her own way, while epitomizing the highest expression of Rococo elegance. 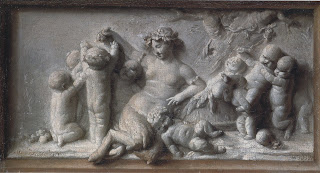 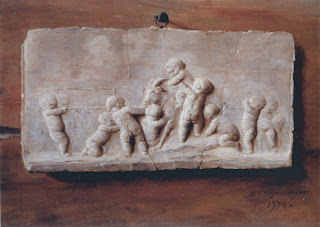 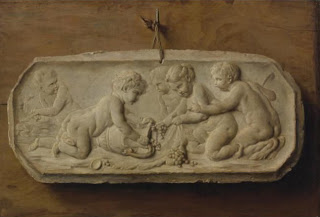