"Art belongs to Humanity": The Nazi Looting of Western Art 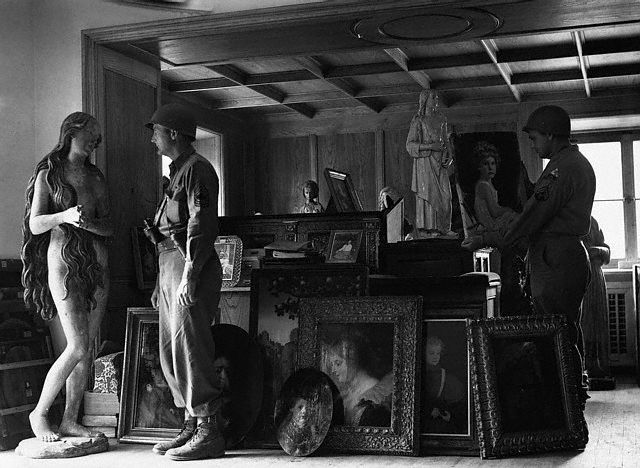 "Art belongs to humanity. Without this we are animals.
We just fight, we live, we die. Art is what makes us human".
- Mikhail Piotrovsky, Director, Hermitage Museum
Piotrovsky's quote from The Rape of Europa really struck a chord with me. Haldane McFall once said that "that man who is without the Arts is little above the beasts of the field." It seemed to me at the time like glib hyperbole. That is until one considers how so many people gave everything of themselves to protect Art from the hands of those who would destroy it. 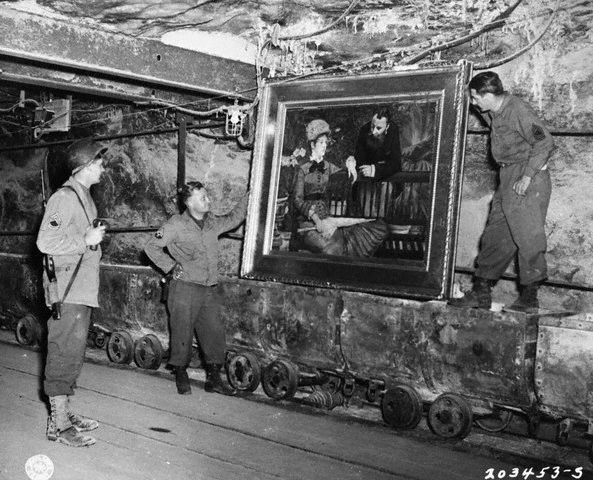 "All of this accumulated Beauty had been stolen by the most
murderous thieves that ever existed on the face of the Earth.
How they could retain the nicety of appreciation of great Art
and be exterminating millions of people nearby in concentration camps,
I couldn't understand then and I can't understand today."
Dr. Leonard Malamut, 11th Armored Division
Though it's true that both Art and War are as old as mankind, and that the victors have always taken the spoils, the plundering of great Art during World War II was on a scale never before seen.

For the period from 1941-45, Poland (alone) estimates 600,000 lost or un-recovered works of art. Indeed, "so great were the number of precious paintings, sketches, sculptures, and objets d’art looted and confiscated by the Nazis from all over Europe - Göering alone amassed more than 1,000 works of art - that whatever Hitler, Göering, and buyers at auction did not want was destroyed." 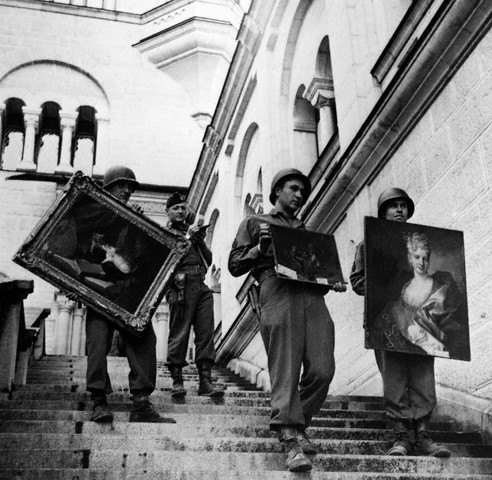 "(The Nazis) committed an outrage on the memory, on the ashes, on all that is holy in our country.
Sacred sites like Leo Tolstoy's country estate, Pushkin's estate
- sacred not just for us, but to the whole world - all were violated."
Nikolai Gubenko, Soviet Minister of Culture, 1989-1991
In the desperate struggle to win, fighting troops were destroying town after town. Though each advance was a small victory for the Allies, the price was often the destruction of historic monuments.

It might initially seem reckless to a generation raised beyond the blight of world-wide war that the Allies would even consider crushing Europe's greatest treasures under tank tracks, yet they had a war to win: The Nazis were doing it; why can't we? Each side cared little about how it was done, they just wanted it done. It might even have struck some of the artists themselves as bizarre that such a huge effort was soon to be made on their behalf. I can certainly picture Carravaggio scratching his head.

Yet, six months into the Allied invasion of Italy, and in deference to reports of razed Italian towns, Eisenhower put into effect a doctrine that would prove fateful: as far as was possible in War, Allied troops were to "endeavor to protect all Italian monuments." Eisenhower's order was soon to be sorely tried, however, when Allied troops surrounded Germans holed up in the Italian medieval hilltop monastery of Monte Cassino. The battle over control of the monastery became a bloody stalemate, with Allied commanders arguing over the order not to fire upon the ancient monument. In America and Britain, parents protested that they did not want their children dying to protect a town. 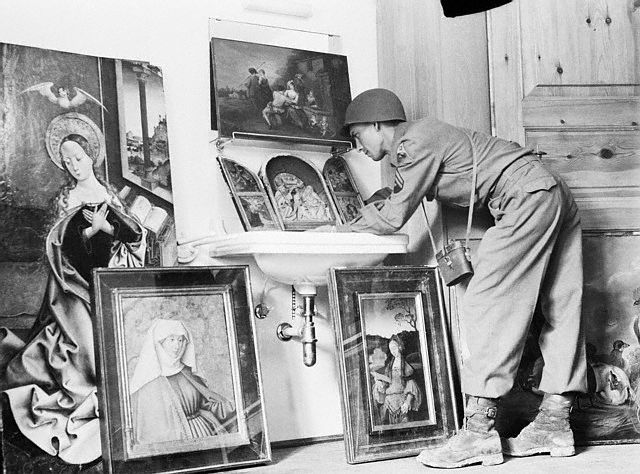 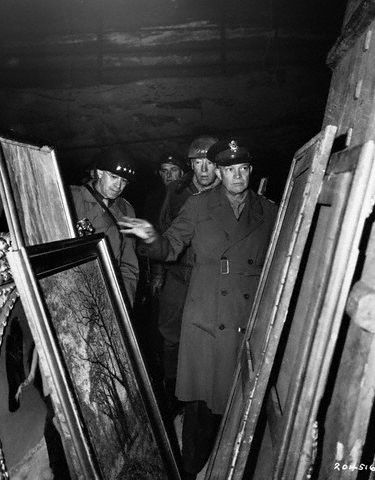 Since 529AD, the monastery had been home to the order of Benedictine monks. It was a national treasure. 2,000 Italians hid in it's stone vaults, convinced that the Allies would never bomb it.

Allied commanders, tired of the stalemate, finally sent a massive firestorm against the monastery. It was the most bombers they had ever sent against a single building. Survivors spoke of the sky filled with planes, and the very air being sucked from their lungs. The building was devastated, but in a massive miscalculation, not one enemy soldier was killed: they had been dug-in around the monastery, not in it. In the end, over 50,000 soldiers and civilians died before the Allies broke through the line. It was a crushing blow to Eisenhower's attempts to protect the native heritage of lands in which they were mired in war.

Of course, and despite sacking and plundering all of Europe, the Germans wasted no time decrying the Allies as "desecrators of European culture". Ignoring incredibly accurate bombing campaigns in Florence and Rome, Propaganda Pamphlets describing the Allied "War Against Art" were widely distributed by Mussolini's War Department. 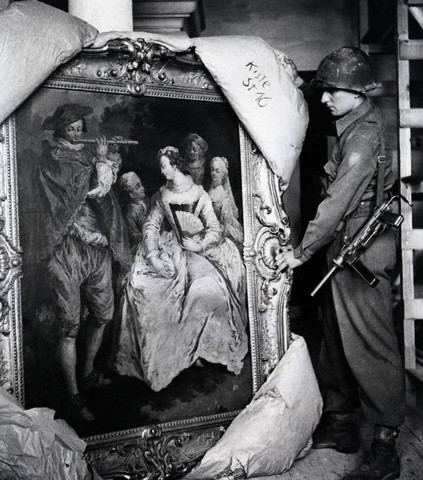 In response to events like the Monte Cassino devastation, and out of growing concern for the protection of Western culture, a group called The Monuments Men was put together. A division of only around four hundred men, they were charged with no less than the preservation of Art and Culture in the operational theater of World War II. 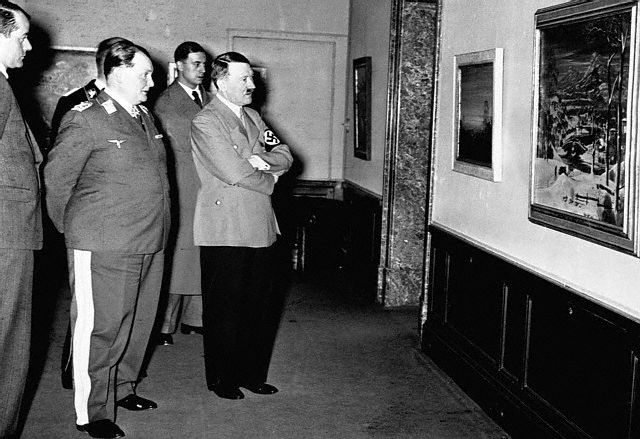 Captain Deane Keller, a portrait and landscape painter, was one of the first experts sent to oversee the advancing Fifth Army. Battle-hardened troops initially tended to resist Keller's efforts, and he struggled to gain the cooperation of soldiers as well as townspeople. Alone with scarce resources, and aware of the massive burden upon his shoulders, Keller begged, borrowed and stole what he needed to get his job done. He followed GIs through booby-trapped ruins to determine damage to important artworks and structures. 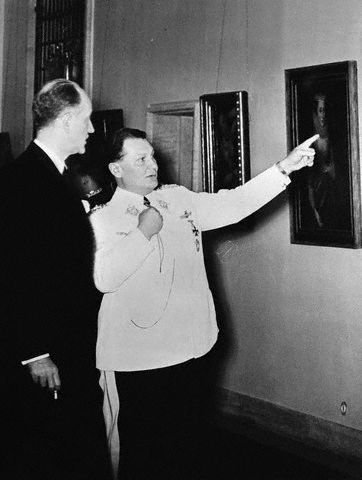 The Camposanto in Pisa had been reduced to a fire-blackened shell. Firestorms had caused the lead roof to drip down onto some of the most important objects of western culture. Gathering thousands of fresco fragments from the floor, he had a temporary roof built to protect his work. To this day, restoration work begun by Deane Keller continues the effort to rebuild the incredible frescoes. Given the destruction during and in the wake of the war, it is incredible that anything survived at all.

High in the Italian Alps, Deane Keller found the treasures of Florence hidden in a small town jail. Keller escorted the trains that brought the Michelangelos, Botticellis, and Raphaels back to Florence. The waybill listed the value of the shipment at $500 million. Monuments officer Deane Keller did not live to see his work completed in the Camposanto, but after his death in 1992, he was honored with a floor plaque commemorating his efforts.

The artworks of Florence were triumphantly returned. People young and old lined the streets to celebrate the return of their cultural heritage, calling it a "victory of beauty over horror."

Reading the words of the Monuments Men, now in their nineties, and listening to their testimony, one is struck by the passion still in their voices. They understood that there was no way to undo what had been done by the Nazis. Yet, sixty-odd years after the fact, the understanding that their sacrifice meant something still resonates within them; that the responsibility for the restoration of the darkened heart of Europe somehow rested with them. There is nothing good about any war, we can just hope that some brave people care enough to let something survive. 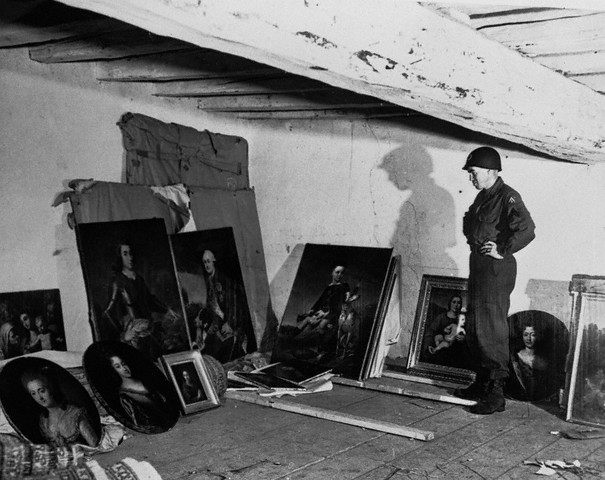