Heartbeat of the City

Excerpt from Baraka, by Ron Fricke. Music by Tortoise.

Living in New York City is a special kind of madness. Every time I walk to the Subway or along the street I can feel myself picking up the pace until I'm rushing along at the same breakneck speed as others, whether I've got somewhere to go or not. People speak of the addictive physical charge of this city, but it turns out that all cities have their own distinct and measurable speed.

London's Millennium Bridge over the Thames famously started swaying the day after it was opened to the public. As thousands of people poured across, the natural rhythm of their footsteps caused a positive feedback phenomenon where the bridge and all the pedestrians began a lock-step kind of dance.


"Known as Synchronous Lateral Excitation, the natural sway motion of people walking caused small sideways oscillations in the bridge, which in turn caused people on the bridge to sway in step, increasing the amplitude of the bridge oscillations and continually reinforcing the effect.The lateral vibration problems of the Millennium Bridge are very unusual, but not entirely unique." Wiki

Oscillating bridges are not news, but in this case it was an unforeseen response to the pedestrians themselves. The greater the number of people, the greater the amplitude of the vibrations.

Experimenters tested whether it's actually true that people live faster in big cities. Turns out it is true: Measured over the distance of 60 feet and averaged, it is possible to tell the size of a city merely by the speed that it's pedestrians walk. In other words, if you tell me how fast you walk, I can tell you not only the population of your city but the average income and lots of other facts about you. We are linked to our cities in fundamental ways, echoing their size with our pace of life.


"Observation of over 1,300 pedestrians at 10 places in Australia and England revealed that walking speed is a function of city size in that pedestrians move more quickly in big cities than in small towns." [source] 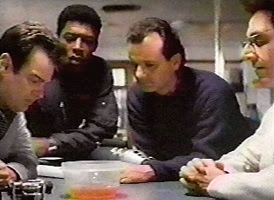 In Ghostbusters II, a toxic slime emanates from the sewers and threatens the city, but the Ghostbusters "discover that the slime reacts both to positive and negative emotions and even 'dances' to music, but suspect that it has been generated by the bad attitudes of New Yorkers." Hollywood stole my thesis.


Stephen Jay Gould informs us that "during an average lifetime, all mammals have nearly the same number of breaths and heartbeats"


"Small animals tick through life far more rapidly than large animals - their hearts work more quickly, they breathe more frequently, their pulse beats much faster. To keep themselves going, large mammals do not need to generate as much heat per unit of body weight as small animals. Tiny shrews move frenetically, eating nearly all their waking lives to keep their metabolic fire burning at the maximal rate among mammals; blue whales glide majestically, their hearts beating the slowest rhythm among active, warm-blooded creatures."

Small and large mammals are essentially similar. Their lifetimes are scaled to their life's pace, and all endure for approximately the same amount of biological time. Small mammals tick fast, burn rapidly and live for a short time; large mammals live long at a stately pace. Measured by their own internal clocks, mammals of different sizes tend to live for the same amount of time.

Elephants are known to sway to the rhythm of their own heartbeat. Believed to be a reaction to unnatural stress caused by life in captivity, their rhythmic swaying was found to be at the rate of about 28 beats per minute, the same rate as their heart. Like elephants in captivity, we live ever faster within the confines of our cities as they expand, our pace of life increasing exponentially. As Tyrell said to Roy Batty in Bladerunner, "the light that burns twice as bright burns half as long."