This is one of the most absurd examples of Ingres' distortion of the human frame, but it brings up an interesting point. Without doubt one of the all-time greatest draftsmen, Ingres nonetheless took incredible liberties with human anatomy.

I visited the Morgan Library's incredible exhibition of Old Master drawings from The Louvre recently, and was blown away by his work, of course, but also by a hand-written letter which was to my mind one of the most telling insights into the man's psyche. The writing was cramped and claustrophobic on the page, and almost illegibly small. It was easy to picture this miserable wreck hunched over the writing desk, his nose - Scrooge like - one inch from the paper. It occurred to me that that's how he must have approached his portraits too.

The guy was quite obviously a madman. By many accounts he was a miserably unhappy human being, who (for the most part) detested the "dull" subjects of his portraits, and yet he could not help becoming obsessed with the finest detail when called to draw or paint them. I wonder how much of the distortion is due to some sort of Mannerist fixation with Style, or whether it was simply because he was so focused on the tiniest and most subtle of details that the overall effect escaped him. I find it hard to believe that his twisting and stretching of the human body wasn't a conscious choice, so that begs the question; why would he want to do that? 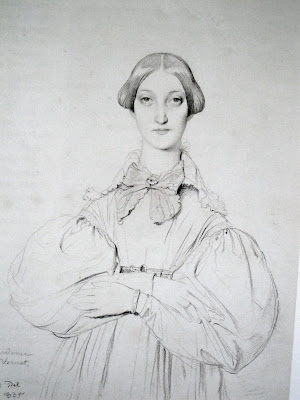 I did a drawing of my daughter Sadie the other day (from a photo of her a couple of years back in her Snow Princess Halloween costume) and decided to compare it to one of Ingres' for a laugh. I mean, why not right? May as well aim high as not at all. Anyway, here it is... 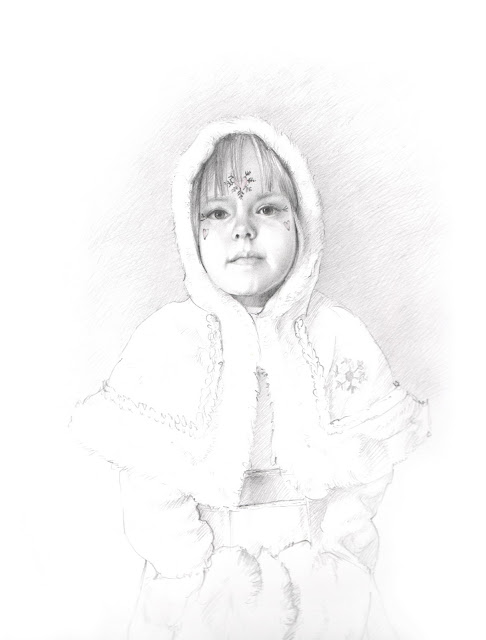 I took the drawing I did and compared it in terms of anatomy to Ingres' drawing of Madame Thiers (below). The Thiers drawing is not even a particularly distorted one by Ingres' standards, but I was still surprised by just how 'off' the drawing was from Reality.

It became immediately apparent that if I was to conform my daughter to the proportions of the Ingres drawing, I was going to have to chop off her head and lift it up about four inches. I ran to the kitchen to grab a knife, but then got side-tracked wondering if maybe Ingres was actually on to something. The real-world precedent of the Burmese women of the Kayan Lahwi tribe popped in my head, and I started flicking through books until I came across this image from Mary Evans. 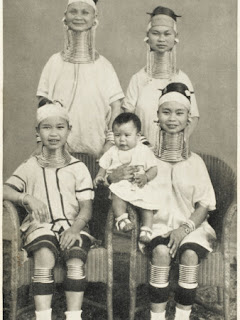 This 1930s postcard depicts an unusual practice that continues to this day. The neck ring ornaments are single brass coils that are applied to young girls (who apparently line up for this treat) when they are around five.

It turns out that my assumption about this bizarre ritual was all wrong: I had always assumed that the metal coils served to elongate the neck.This is not true. As the child grows, the first coil is replaced with longer and weightier coils that push the collar bone down and compress the rib cage. Contrary to popular belief, then, the neck is not actually lengthened; the illusion of a stretched neck is created by the deformation of the clavicle.

A quick comparison to Madame Thiers, and it's evident that it's not the neck that Ingres stretched, but (like the Kayan Lahwi) it is the shoulders that he dropped. The waist line remains more or less correctly positioned anatomically, as does the position of the head. It's the clavicle that drops down to create the 'Ingres look.'

"Okay," I thought, "perhaps Ingres adheres to the same aesthetic criteria that drive this ancient practice." I didn't actually say it like that, because that's not how I speak. Probably more like "holy shit."

I tested the results on my daughter by showing her these two versions of the drawing (below). On the left, my daughter's natural shoulder line and on the right, the Ingres proportions. I was shocked that she chose the un-natural Ingres version over Reality!

The lesson for me was clear: As long as the distance between head and waist remains more-or-less true to life, you can drop the shoulders as much as you want and still have a drawing that appears correct. Dropping the shoulders may even make your portrait look more correct than the real thing.

In fact, you can draw anything at all under the sun and it doesn't even have to look correct, just as long as it's drawn really really well. Now I just have to revise the 'Draw what you see, not what you Know' dictum of the old life drawing studios, and keep practicing. 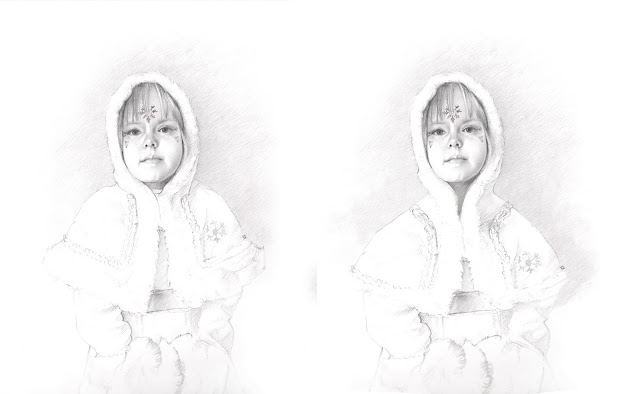 Some more Ingres portrait sketches to finish off the post... 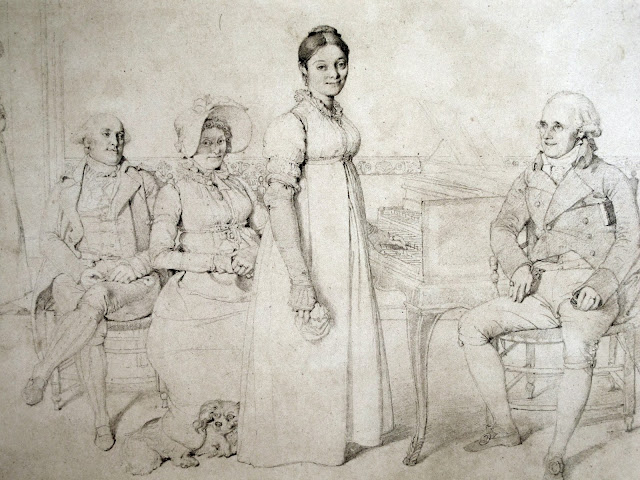 This drawing is another great example of distortion by Ingres. Look how long his fiancé's arm is, and how short her legs are! He drew her looking more like an ape than a human.

It's a loving family scene on the one hand, with old what's-her-name staring straight out at Ingres, tinkling away on the pianola (or whatever that thing is). On the other; he can't have cared for her too much since he broke off the engagement soon after this drawing, claiming that he was too distraught to return to Paris from Rome [His paintings had just received terrible reviews from the critics].

His melancholy was so troubling since his bid for Salon recognition went tits up, that he decided to hang out in Rome as a single man and leave his fiancé at the piano. What an excuse! It's the old "it's not you, it's me" eye-roller, but in this case, it's even more laughable; "it's not you, it's Paris."

Maybe he did mean to draw her like an orangutan after all. 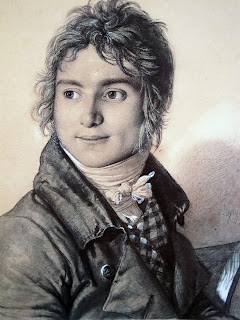 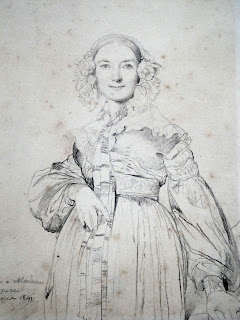 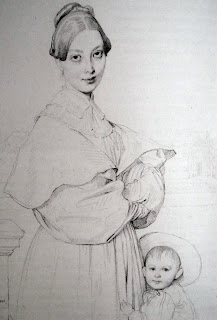 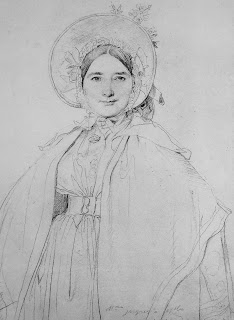 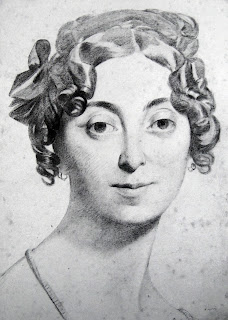 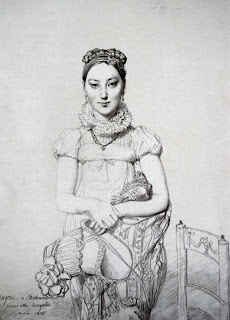 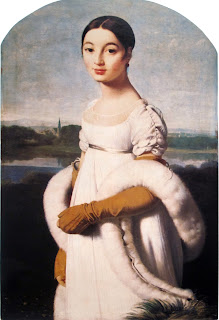