The Artist as Editor v. the Autistic Savant 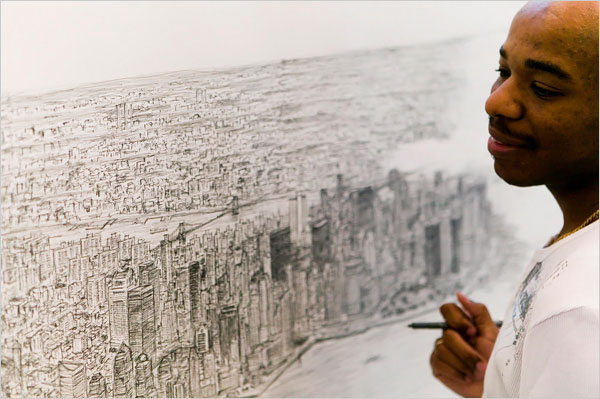 "Art is nothing if not an editing process. "
I put that in quotations to make it seem like some sort of rule, but I just said it myself. Actually it's more of a truism than a rule, like "An evil genius always has an English accent."

But all-knowing Wikipedia tends to agree. When discussing composition, it says of 'Simplification' that:


"Images with clutter can distract from the main elements within the picture and make it difficult to identify the subject. By decreasing the extraneous content, the viewer is more likely to focus on the primary objects."

I've touched on the broad subject of composition elsewhere on this blog, but it's always interesting to note the exceptions to any 'rule'. Generally speaking, we use our cognitive and creative abilities to whittle down to (our version of) the essence of an object. Like applying filters, we remove information or supplant it with our personal impression of what is essential.

If we accept that as more or less true, then what do we make of someone like Franco Magnani, the so-called 'memory artist'? Through a neurological disorder he is concerned with the opposite, creating paintings of his home town, a place he hasn't seen in over 20 years, that are a manifestation of the almost holographic visions that occur to him with hallucinatory force. He seems to paint in a very real attempt to put down every single detail. 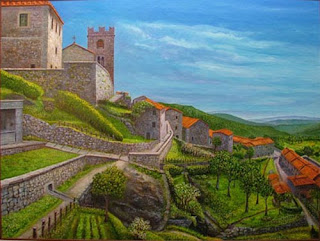 Or, what of the case of artist Stephen Wiltshire? Diagnosed with autism, his primary mode of communication as a child was through pencil and paper, sketching buildings in incredible detail. His 13' x 7' drawing of London (after being raised up to a vantage point in a helicopter) is beyond impressive: it's a testament to the innate power of the human brain. A brain that, by the way, has not changed at all, genetically speaking, since our days of knuckle-dragging across the Serengeti. Of course, development of one part of the brain to this degree usually carries with it the terrible price of a kind of atrophy of others, specifically with regard to socialization skills. It's as if, in these instances, raw brain power blisters up through the protective layers of socialized norms.

There are a number of videos on Youtube dedicated to his amazing abilities. Here's one:

The Wisconsin Medical Society said that:


"Perhaps the most striking and astonishing display of Stephen's remarkable visual memory and drawing ability occurs in a segment on a 2001 BBC documentary entitled Fragments of Genius. In this segment Stephen is taken on a helicopter ride over the city of London. After a brief ride, he returns to the ground where, in three hours, he completes a stunningly detailed and remarkably accurate drawing of London from the air which spans four square miles with 12 major landmarks and 200 other buildings drawn to perfect perspective and scale. Words cannot describe the prodigious ability and visual memory that drawing documents; it needs to be seen to be appreciated."

There were hundreds of calls and letters to the BBC following that broadcast seeking to purchase originals of Stephen's artwork. That initial interest and then a sustained demand for the drawings led to the publication of an entire volume of his works entitled Drawings (J.M. Dent & Sons, Ltd, London, 1987). 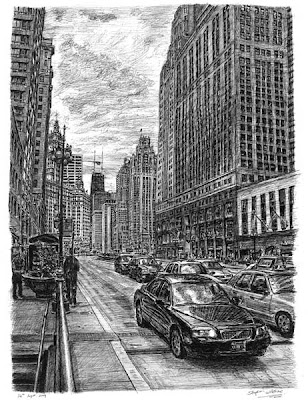 As a side note, there's an interesting set of slides called Art and Autism on the studio 360 site showing the different ways of viewing a piece of artwork between an autistic person and a so-called "normal" person. The process of skimming that we do on a daily basis in order to reduce the sensory load on our brains, wherein we make instantaneous decisions about what is important about a subject, is somehow skewed or missing in some autistic people.

So what to make of the process of creating art in the light of anomalies such as these? I believe that the majority of us must be content to follow the rules, treading a line between expression and restraint. Gunter Grass says "we must brave the strength of our emotions every day". Waxing poetical as usual, Kalil Gibran [Prophet and Art Critic! - he's getting two pay checks this week] says:


"Your reason and your passion are the rudder and sails of your seafaring soul. If either your sails or your rudder be broken, you can but toss and drift, or else be held at a standstill in mid-seas. For reason, ruling alone, is a force confining; and passion, unattended, is a flame that burns to its own destruction."

Well, all hyperbole aside, there's probably a nugget of truth there. Any thoughts?