The Future Ain't What it Used To Be: Murals into the 21st C.

This post is an add-on to my previous post regarding the death of large scale painting. The answer to the question of who is carrying the art into the twenty-first century century is, of course, street artists. The incredible profusion and ingenious variety of so-called graffiti art is familiar to anyone who lives in an urban area.

Here are some of my favorite artists who have contributed to the scene, in no particular order. This first video clip is a great example of how the art has been shifted from the sponsorship of monarchies and governments to sponsorship by galleries and corporations. Artist Jon Burgerman, of Nottingham UK, was commissioned by AOL to produce a large scale piece for their new corporate offices in Astor Place, Manhattan. It's a great concept, beautifully rendered, wherein the employees of the company are directly involved in the completion of the mural (shout out to my wife, who was one of them!).

Check out more of his work on his website.

The subversive element is still alive and well too, with artists producing work in the dead of night or away from the watchful eyes of the law. A cross between prank and political commentary, street art can be some of the most inspiring work around. 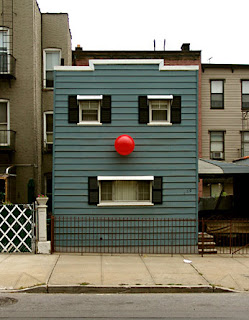 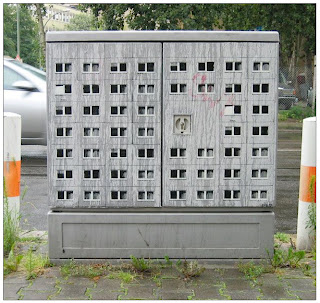 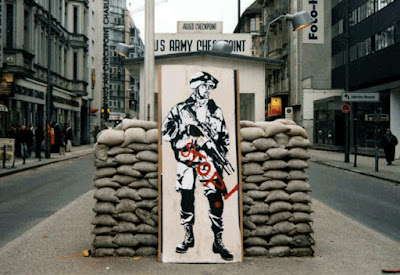 Blek le Rat has been producing amazing work for about three decades, and has inspired a host of new talent to take their work to the public arena. The Independent in the UK ran a great article regarding Blek's work, and of course it's relationship to the work of Banksy (whom I haven't even gotten to on this post), who has been made even more famous by his new movie. The article goes on to speak about Blek's motivation and introduction into the world of street art:

Studying architecture, he explains, taught him how to understand an urban landscape and how to see the space around him. This, combined with the "illumination" that came with discovering a new world of politics and sociological awareness, and his earlier studies in lithography and painting, made street art an obvious outlet for his talents: and so, in 1981, he began to combine his skills, to express his thoughts and create art for the masses.


One of the main sources of Banksy’s inspiration, Blek le Rat is an old-school French street artist who’s been stenciling since the early 80s. Blek’s inspiration came from a trip to NYC in 1971; he saw the graffiti there and loved it, but didn’t want to imitate their style. When he returned to Paris he began painting on walls, and the rest is history. Blek’s stencils cover a variety of subjects, but his trademark is stenciled rats. They’ve adorned walls from Paris to South America, with plenty of stops between. Blek has been involved in community art projects and his work has been included in many books about graffiti history.

Rotterdam artist elpussycat uses light itself as the medium for these playful images. Documentation is clearly a major aspect of street art, where the work is often meant to be temporary or is destroyed. Without a photograph to prove it's existence, who's to say it ever happened? Artist Andy Goldsworthy uses photography in a very self-conscious way to record his meditative and ephemeral work, which creates a tension: what is he, photographer or sculptor? I find that, in his case, photography itself occasionally gets in the way of my appreciation of the artwork: It's as if Goldsworthy creates the piece specifically for the camera lens. Elpussycat plays with that notion and pushes it further: There is no art, in effect, but the photograph. 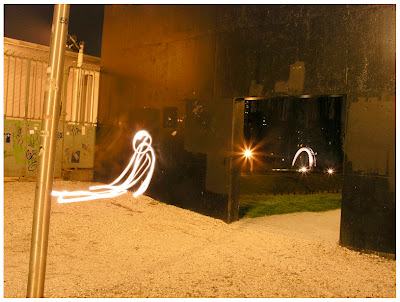 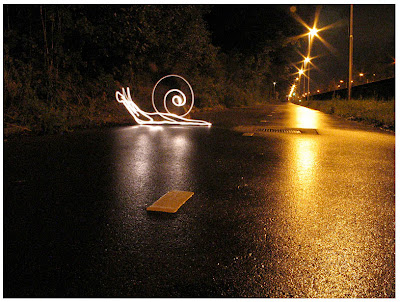 Along the same lines, one of the most exciting progressions in traditional street art has to be the work of DAIM (thanks to Jeff Pollastro for this link). I can only shake my head in awe when I think of the possibilities when combining digital and traditional media, and DAIM is consistently at the forefront.

The ridiculously talented BLU, from Bologna is a great example of the insane passion for large scale murals that some of these artists possess. Limiting himself to the traditional tools of brushes and rollers, and a limited palette of black plus one or two colors, he produces intensely striking work of remarkable originality. He also has one of the best websites I've ever seen. Check it and his work out here. BLU has a collection of the sketches he uses as preparation for his murals for sale at studiocromie.

Below is his massive mural of a shark composed of countless $100 bills, as seen on Colectiva's blog. 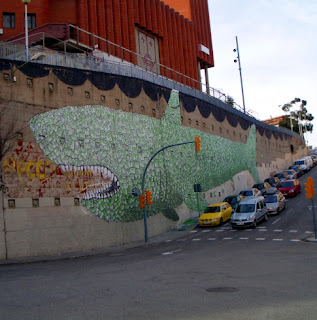 Here's one he did in Buenos Aires, Argentina, courtesy of b-uncut: 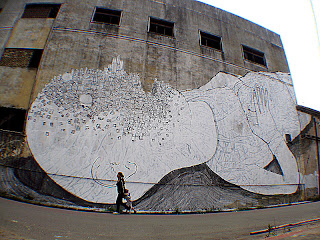 I posted a link previously on this blog's Facebook page of his time lapse street mural project BIG BANG BIG BOOM, but here it is again in all it's glorious madness:

Another one of my faves is Mariusz Waras, from Poland. He's been furiously creating and archiving street art for the last 15 years under the banner of m-city, using urban architecture as his main inspiration for outstanding work. Please look at his site for an idea of the scale and breadth of his work... 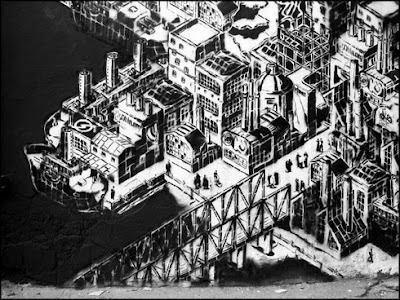 Tabas, from France, has been producing playful large-scale wall art in and around Marseilles for years. Starting out as a traditional street artist, he has since branched into print & design, starting his own company, Tabasstudio.

Whether through gallery and corporate promotion, public discourse and political activism, or graphic and product design, traditional street art has rippled out to affect modern culture in ways as diverse and inventive as the work of the artists themselves.

This list is by no means exhaustive and could (and will in a future post) go on and on, but that should provide enough food for thought for now, and reassurance that the art of the mural is clearly alive and well!