Here's a plate from the book 'The Studiolo of Urbino: An Iconographic Investigation,' by Luciano Cheles. It shows the South Wall panel elevation of the breathtaking marquetry from  the room (now in the Met) known as the Gubbio studiolo of Urbino.

A masterpiece of inlay, the panels of the Studiolo display the most convincing perspective I've ever seen. Every time I stand in the middle of this small room, I'm stunned at the skillful design, workmanship and (let's face it), the insane amount of time it must have taken just to create the perspective of the imbrocated coin motifs in the borders, let alone the entire room. 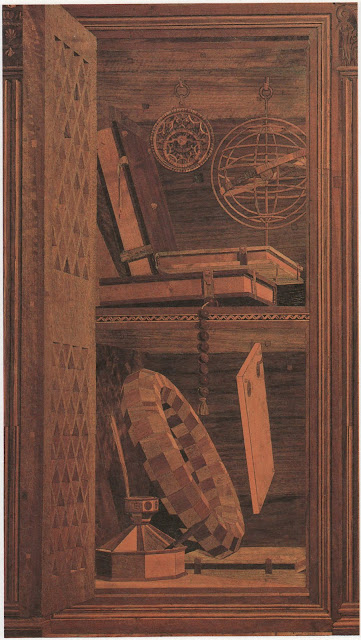 This is a drawing that I know you haven't seen before. I drew this myself, based on the panel above. Anyone out there care to use this as a template for marquetry?

I drew my own version of Uccello's polyhedron in perspective, as one of the elements in the cabinet scene below. I did stop short of trying to create the perspective of the borders though, opting instead for more standard ornament. What do you want from me, blood?

I posted a number of really great drawings of this kind of ornament as part of a set of drawings that come from the Pierre Ramond set of volumes called Masterpieces of Marquetry. They're worth taking a look at. Here's a separate article on this blog about Ramond and his work. 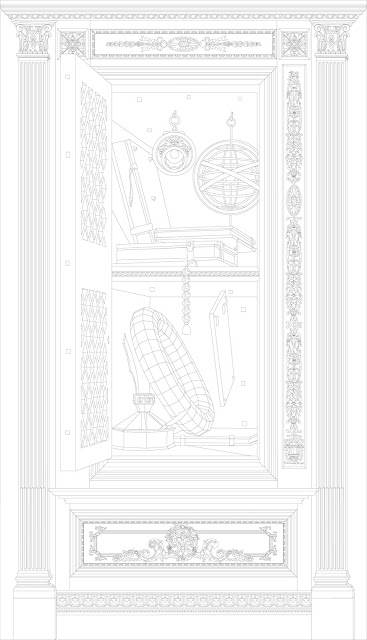 Here's a nice Flickr set of images of the Urbino room.